PSG Striker, Mauro Icardi has praised fellow team-mates Neymar and Mbappe saying it’s a joy to play with them

Paris Saint-Germain striker Neymar is a dream to play with, according to team-mate Mauro Icardi, who says that the professionalism of the Brazil ace is exemplary along with that of Kylian Mbappe.

Neymar’s commitment to PSG has often been questioned, while his behaviour both on and off the field has come under scrutiny, with the world’s most expensive player frequently pictured enjoying Paris’ nightlife.

But Icardi, who joined the Ligue 1 champions permanently from Inter recently, having been on loan for the duration of the 2019-20 campaign, says that the image of the 28-year-old portrayed in the media is a false one.

“People may see it differently from the outside, but the reality is completely different,” he told France Football.

“We all know very well what kind of footballer Neymar is, and when you really know the man, you can only get along with him because he’s someone very different from the media reports.

“He’s a team-mate who doesn’t hesitate to make sure that others feel good. This is the state of mind we need. 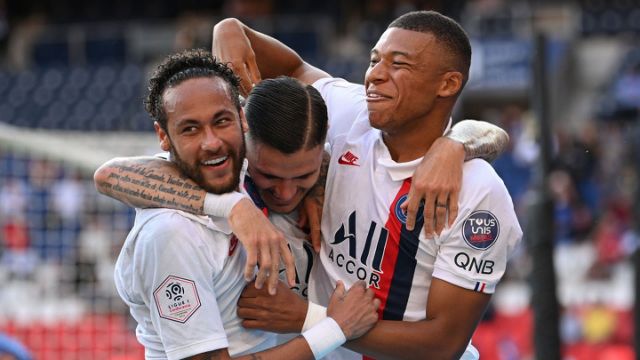 “Great players are the first to set an example. He’s a guy who’s always happy and gets along really well with everyone. He has humility.

“It’s important to be yourself because, in the end, we’re like a big family that spends almost every day together. His good humour makes us feel good every day.

“Everything I told you about Ney also applies to Mbappe. He’s a guy who is still young but has already achieved great things. He is extremely mature for his age. His behaviour also contributes to the good atmosphere there is within the group.”

Meanwhile, the Argentina international has looked forward to the Champions League, in which PSG are in the quarter-finals, and while he appreciates that they have a chance to go deep in the competition, he is wary of the opposition.

“I realised on the day of the draw that on our side there was no team that had already won the competition, while on the other side, there are practically only previous winners,” he said.

“But be careful, because the teams in our part of the draw all have the same ambition as us, that is to say to finally win this title and change the course of history.

“In recent years the team have failed in the Champions League and we are all very committed to changing that. The club’s objective is to reach the final, and God willing, to finally be able to lift this trophy, because that is the reason why the club has invested in recent years.”

Semi-finalists in 1996, PSG must overcome Atalanta in the quarter-finals before a potential match-up against Atletico Madrid or RB Leipzig.

Vettel To Race In Spain With New F1 Ferrari Chassis

Europa League: Wolves out as Sevilla head to Semi-Finals