Facebook on Thursday launched an image-centric messaging app which they dubbed Thread App. The app itself although a full app I its own right is integrated into Instagram. The app is Facebooks answer to Snapchat or at least its meant to be. 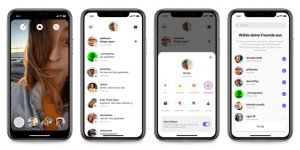 “Threads is the fastest way to share a photo or video with your close friends on Instagram,” Stein said.

“Messages from your close friends’ list will appear in both Threads and Direct, so you have full control over how and with whom you want to interact.”

The Thread App is in line with Mark Zuckerberg’s idea of creating ‘digital living rooms’ rather than ‘online town halls.’

There’s need for more direct interaction between people and Facebook is championing that campaign the initiative also in keeping with  ‘digital wellbeing’ that has become a rave in the tech community since Android Oreo launched. Tech giants are concerned about the amount of time that’s being spent with smartphones and social media that’s what makes the Thread App such a innovative image-centric messenger. After all a picture is worth more than a thousand words.

“For your smaller circle of friends, we saw the need to stay more connected throughout the day, so you can communicate what you’re doing and how you’re feeling through photos and videos,” Stein said.

“That’s why we built Threads, a new way to message with close friends in a dedicated, private space.”

‘Thread’ gives users the option of automatically sharing status updates including where they are, say at a cafe or on the go, without sharing exact locations.

The feature promises to raise privacy concerns, given criticism that has pounded Facebook regarding how well it safeguards people’s data.

“You can choose from a suggested status, create your own or turn on Auto Status, which automatically shares little bits of context on where you are without giving away your coordinates,” Stein said.

“Only your close friends will see your status, and it’s completely opt-in.”

The has begun to roll out on the IOS and Android platforms.