The fight between Instagram bigboys Huspuppi and his friend Mompha, has continued to rage on social media with the new twist being Nollywood actress Tonto Dike’s presence in the matter. 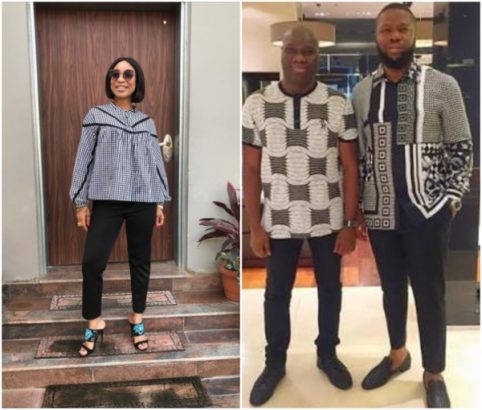 The Controversial actress who has been in the news lately following her marital crisis, has slammed Mompha in a recent post, calling him an unfriendly friend and demanding account details in order to refund the $5,000 allegedly owed by Hushpuppi.

The actress finally spoke up on whose side she stood after she unfollowed and followed Hushpuppi.

There have been rumours that the two have a thing going on after several suggestive comments between the two have been spotted on social media. This will not help in quelling the rumours.

“After deliberating on everything that happened, I can confidently say without fear that Mompha was never Hushpuppi’s friend. Hush mistakenly thought he had a friend and a brother in Mompha but Mompha never saw him as one.

Nigga was still dining and snap chatting with Hush but there he was speaking ill of him to his wife via text messages as he himself posted online. Men usually do not do this. When their friends move in with you, they will say anything to cover up for them.
For Mompha to even go and look for “Hush’s daddy’s cab” to snap a picture of it and use it to shame him means he is really petty and a bitter person. They both called out each other on social media but Mompha’s level of “bitchness” beats my imagination.
Boi, nigga be posting his family house and all to prove he is the son of Bill Gate.. boi! .

But who am I to give my opinions on billionaires fight? Oya lemme kukuma go and chop some sleep.

Lessons learnt-: 1- Becareful whom you let into your life as a friend. Some people only come into your life because they envy you and the only way to bring you down is to get close, know your flaws and use it against you.

2- To @hushpuppi [hopefully you get to see this]. Never accept this Mompha back into your life. He has never been a friend to you. A friend who will even keep traces of things you told him in confidence and use it against you when you have issues, has been a traitor from day one. Run from such people.

@mompha [hopefully you get to read this].. send your bank details via dm, comments, email, text or WhatsApp and let me credit your account with the $5k that you claim your friend owes you. Billionaire sons don’t spend so much time, energy and data on $5k debt so I have decided to save the situation… boi! Both of you should stay away from each other. That friendship isn’t healthy. #cutiesthoughts”
Tonto Dikeh 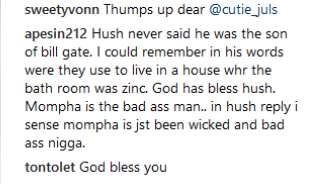 Woman Reportedly Booted out of the Choir for Marrying Muslim

I almost wept for Nigeria after exchanging N500 for $1 – Davido