As the infamous drama regarding Tonto Dike’s crashed marriage with Churchill continues, the Nollywood actress hit back at her friend’s brother, Michael  Ozigbo whom she claimed went to jail because of her ex-husband’s alleged fraudulent activities.

Recall that the actress in an Instagram post had revealed the young man was used by her husband and in a quick response, Micheal replied her dissociating himself from her allegations.

Michael called out the actress calling her a liar saying he never went to jail and advised Tonto to go focus on herself and stop bringing her family down.

Tonto Dike didn’t take his response lightly and went on to call his mum, wife ‘a shame’. 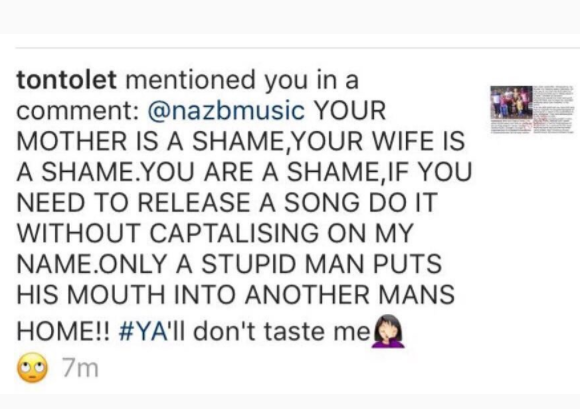 In reaction to her insult, Michael wrote;

‘It only takes a good woman to know you don’t insult people’s mother or wife, it’s called home training, I decided to set the record right because am his only contact here and you know it deep inside you. my brother called me that your husband was coming, I put his company events together here, we know the truth in case you want to be dirty with your husband, don’t involve people and also no one went to jail here, Churchill hardly stay not even more than ten days in a trip’.

‘Truth be told what makes you think I want to be famous with your name? Are you Rihanna? Nicki Minaj? Or tiwa savage? Don’t forget I never asked you for any favour. My advice for you. It’s better you use all your energy on your work to be a better person instead of trying hard to bring your partner down by force’.