Tottenham Hotspur reached the pinnacle of the Premier League table after a clinical display of crisp and tactical discipline to get the victory over Manchester City.

The fierce game played from end to end between Jose Mourinho and his old adversary Pep Guardiola. However, the Spurs manager came out on top at the 90th minute as his team’s season gathered further momentum

Attacking midfielder Son Heung-min drew the first blood as he put Spurs in front after five minutes from the start of the match, driving in a nice finish from Tanguy Ndombele’s pass before Manchester City had a first-half goal ruled out by VAR for a handball by Gabriel Jesus after Aymeric Laporte’s finish.

Most of the possession during the game were in the hands of City, but Tottenham, who were not relenting were fiercely drilled and resilient, taking their chance when it came to double their advantage and finish the game.

The second goal came in the 65th minute after  tactical Mourinho substitute, Giovani lo Celso slotted in a low finish from another Kane pass 35 seconds after coming on for Tanguy Ndombele – the only cloud for Spurs coming with a late injury to Toby Alderweireld after an outstanding performance.

Mourinho was filled with energy displaying his technical prowess as Spurs took all Manchester City could throw at them to come out with the win that puts them at the Premier League summit and also made a powerful statement about their ambitions and aspirations. 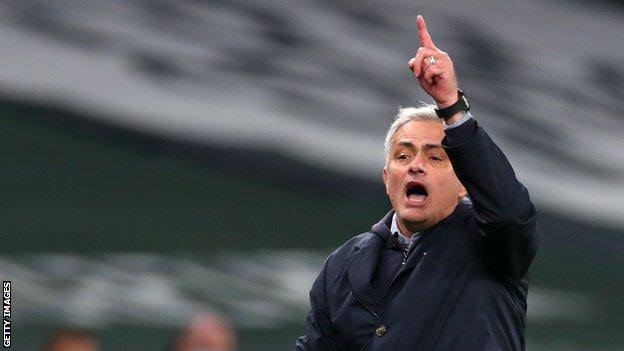 Mourinho’s voice echoed around this vast, empty arena as he urged on his players, shouting instructions with regular demands of “press the ball”. Guardiola, in contrast, was understandably subdued and downcast.

It is still early days for a club that has struggled to win silverware over so many recent years, but there is a growing sense of strength and optimism around Spurs, fuelled by a serial winner as a manager who looks revitalised after the acrimonious end to his spell at Manchester United.

Spurs have the golden threat of the likes of Son – who has now scored 11 goals in all competitions this season – and Kane, with Gareth Bale on the bench here, but they now have some many of the usual Mourinho traits that have always made his teams so difficult to beat.

It has been a year since he succeeded the hugely popular Mauricio Pochettino and Spurs are starting to resemble Mourinho’s image and likeness, epitomised by the unfussy but highly effective midfield sentry Pierre-Emile Hojbjerg, a signing from Southampton that was a managerial priority in the summer.

Tottenham are currently a potent mix of solidity and threat, as proved by the way they dug deep to keep Manchester City out before striking to deadly effect. Spurs had two shots on target and scored twice.

In Kane, Spurs also possess the complete forward at the very top of his game, a class act as a provider for the ninth time in as many league games this season – but also the master marksman when his chances come along, as they will with regularity this season.

Tottenham and their fans will not get carried away but there can be no denying Mourinho’s tried and trusted methods are having their effect, with the long-time foe Guardiola the victim on this occasion.

Manchester City clearly had a grievance against the decision to rule out Laporte’s goal for handball against Jesus that left them nursing a sense of injustice. However, it would still disappoint Guardiola that his team had so much of the ball but actually did so little with it when it came to seriously testing Spurs keeper Hugo Lloris.

It has become something of pattern with Manchester City and this was another occasion, although Guardiola did not feel able to risk the likes of Raheem Sterling and Sergio Aguero other than on the substitutes’ bench, reducing their level of threat.

City’s defense was easily sliced by Ndombele’s pass for Son’s 5th-minute mark strike and there was almost a sense of inevitability that the lack of bite in their game would end with Spurs adding a second goal via Lo Celso.

READ ALSO: Social media regulation: “There must be freedom with boundaries” – Tunde Bakare

Mike Tyson Fights to Draw with Jones Jr. in Exhibition