Chelsea star forward, Eden Hazard may move to Madrid at the end of the season according to some new reports.

He has allegedly had a personal agreement with the Spanish giants, Real Madrid Football Club.

The Belgium talisman has been in the news for some time, with speculations flying around that Madrid’s current manager, Zinedine Zidane, is interested in having him join his team as soon as he can.

Luckily for him, Hazard will soon begin his last year in the Chelsea contract he signed, making him an easy target during the next transfer window.

This also implies that the coming summer is the only one Chelsea has to demand a huge transfer fee from Real Madrid. It would no longer be possible as soon as Hazard’s contract runs out. 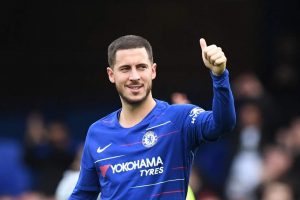 The reports on the blues forward’s agreement with Real Madrid was shared by Fred Calenge, a Telefoot journalist.

Meanwhile, Hazard’s former teammate, and current goal keeper for Real Madrid, Thibaut Courtois has also expressed how useful his addition would be to the team, especially as Zidane has been planning to overhaul the current team by introducing fresh talented players.

While discussing with a Belgian newspaper, Het Nieuwsblad, Courtois said, “I would choose Eden, of course.

“I really like him, but the choice is up to the board.

“I do not know what will happen. That is not a question for me, but for the chairman and the management.

“The team is what it is now. Karim Benzema is in a good shape and scored 17 goals. Bale started well, but then had to deal with injuries.

“You see in the matches that we have quality, only sometimes it is not possible to score.”

“I worry for my safety” – Omotola Jalade-Ekeinde

No state has approval for automatic weapons – Presidency replies Akeredolu