It might too early to say but Manchester City self-destruct mode may just be surrendering the title to an impressive and much improved Liverpool. City conceded two goals including a 90th late sealer to drift league leaders Liverpool by 8 points.

Adama Traore who had not scored in previous 39 games turned up the style against title holders City on Sunday afternoon to inflict a surprising but efficient defeat on Pep Guardiola’s men.

Traore scored his first ten minutes from the mark capitalising on a Joao Cancelo’s error and added the second deep into injury time.

David Silva came close to netting for the host but saw his shot canon off the crossbar while Raheem Sterling’s scammed shot was blocked.

“We were not at our best. We had chances to score but it was a bad day and we lost the game.

“We did not make good process, we had problems in that sense. We are a team that plays a specific way but it is a bad day, that happens sometimes.

“When you win games, you think about the other one. Now we have the international break, then we can come back and go to the other games.” 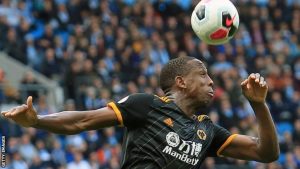 Wolves’ coach Nuno Espirito Santo had this to say;

“We played good, the performance was good but defensively was very good and very organised. The boys worked hard until the end. The fans enjoyed it.

“We had a couple of good chances early on but it is too difficult to play against Manchester City. They play so fast but the chances came eventually. More importantly is how the players did their tasks, very good.

“Adama Traore is improving. He is special because he is very fast, he is unique in that and we searched for a moment of talent.

“It has been a long season already, too many games, but we always compete. I cannot say any game they have not done that. This is the way we want to work, maintain and sustain this.”

Power will return to the Yorubas – The Next President