Rappers 50cent and Rick Ross have reignited the flame of their beef on social media once again via a couple of rude and disparaging Instagram posts and it’s looking like their beef is eternal.

The two have been feuding since 2009, and just when you feel the tension between the two has died down, 50 finds a way to the light it up once again.

As with most of Fif’s battles, the comments have been mostly one-sided, but Rozay has been giving in to his incessant trolling now and again.

50 has been going at Ross on Instagram over the last couple of days, recently clowning the MMG boss for his latest merch item — a t-shirt modeled after his own torso. Ross fired back, but the posts have now been deleted. However, the ‘Gram battle opened up again early this morning, naturally with 50 playing the instigator.

“Ok this is a good movie a correctional officer who raps like a drug dealer till he believes it,” wrote Fif, pairing the caption with the infamous photo of Rozay in his C.O. gear. “then kid naps and beats his grounds keeper as his record sales dwindle to nothing. So he marries a 22 year old stripper his crew already ran threw.to make sure someone will visit him. LMAO ️ wait I want to buy the movie rights.”

After a couple more disparaging posts (including one where he once again bragged about being in possession of an MMG chain), Ross replied.

“@50cent your son applied to be a intern at @untouchablemmg and it Will be processed.As you well know I got 40 cars/200 acres and a mower w/ his name on it. #ImWhatYouUsedToBe,” Ross captioned a photo of his many whips.

While we can’t confirm if Rozay’s claim is true, we do know that Fif’s relationship with his son isn’t the best, and he’s made a point of befriending his father’s enemies before.

See some of their chats below: 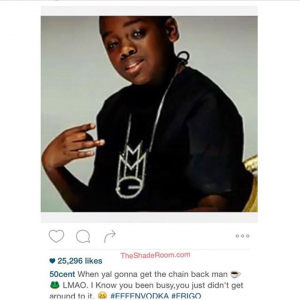 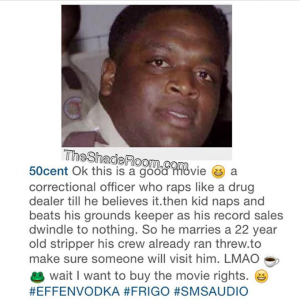