Twitter has just updated its platform with a new limit on the number of accounts that users can follow in one day.

The social media site used to allow users to follow as much as 1000 other users on a daily basis. However, the new update has cut down the number by 60  percent. This means users can no longer follow more than 400 other accounts within  24 hours.

The latest update came as a result of the management’s efforts to curb different forms of illegalities and misuse of the platform.

Some other steps that have been taken towards this direction include restricting bots from engaging the audience or sending auto-response messages.

Sometimes last year, its management announced that over 143,000 apps were discontinued as a result of misuse and illegalities. The company stated that there was already a growing concern over the abuse of social media and all sorts of manipulation being done on it. 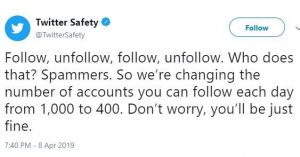