Twitter has smacked a warning label on Donald Trump’s tweet in which he warned that if protesters tried to set up an “autonomous zone” in Washington DC they would be “met with serious force!”

On Tuesday, Donald Trump tweeted: “there will never be an ‘Autonomous Zone’ in Washington, D.C., as long as I’m your President. If they try they will be met with serious force!”

Addressing the tweet, Twitter’s safety team wrote in a statement: “We’ve placed a public interest notice on this Tweet for violating our policy against abusive behavior, specifically, the presence of a threat of harm against an identifiable group.” 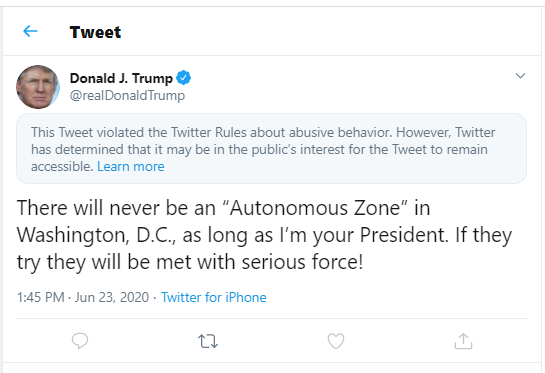 Twitter users, including Trump’s supporters, will be unable to retweet the offending tweet due to the measure.

Criticizing Twitter’s decision Tuesday, House Republican leader Kevin McCarthy tweeted that “citizens have a right to hear directly from their President and decide for themselves what to think about it.”