A Twitter user has narrated how the DPO of Warri “B” Division shot and killed his barber in Warri, Delta state.

@Heir_2D_Throne yesterday tweeted about how he found out that the barber who usually cut his hair was shot and killed by the Divisional Police Officer in charge of “B” division in Warri, Delta state.

“Called ‘them’ yesterday & asked about the dude who usually cuts my hair “Bros, police don shoot am die since March oh” *Silence from my end*,” one of the tweets read.

According to him, the barber had been arrested for an unspecified charge and after being singled out by the DPO because of his dreadlocks, he was shot and his body later dumped at the mortuary, where an attendant who recognized him informed his colleagues of the incidence.

He further added that the case was still in court while the body of the deceased remained in the mortuary.
“Matter is in court, dude is a barber, poor family. I bet that case would die a natural death… since March dude is still in mortuary.”

See the tweets below; 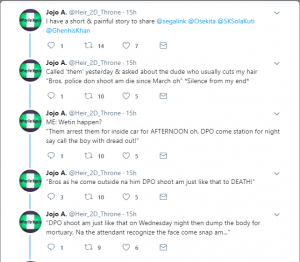 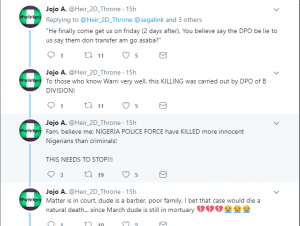