The UK government through the British High Commission in Nigeria on Tuesday, December 10, in a post on Twitter called on President Buhari to respect the rule of law as regards Sowore’s case.

Its tweet read:  “We are following closely the continued detention of #Sowore. Respect for the rule of law and free and responsible speech are fundamental for #democracy.” 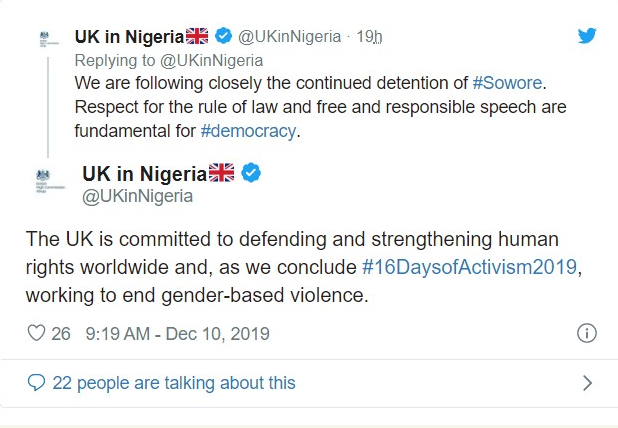 Earlier, The Herald reported that United States Senator Bob Menendez representing New Jersey made an open declaration saying there would be dire consequences should any harm come upon their citizen Omoyele Sowore following his violent re-arrest by DSS operatives in the court.

Senator Menendez made this known during a Press briefing that also included Sowore’s wife Ope Sowore. The senator who was appalled at such blatant disregard for the law, was forced to call a Press briefing after seeing a video of the harassed Sahara Reporters Publisher making rounds on social media.

He said: “I am outraged by the blatant harassment of Omoyele Sowore, an activist and journalist whose only crime appears to be exercising his right to free expression. In a concerted effort to secure his release on behalf of the Sowore family living in New Jersey, my office has been working closely with the State Department as Mr Sowore’s case languished following his arbitrary arrest back in August.

“While we continue to seek immediate answers about Sowore’s treatment and conditions in jail, I will be further engaging directly with US Ambassador, Mary Beth Leonard, in Abuja to raise this case at the highest levels of the Nigerian government so that the Buhari administration gets the message that we are committed to defending Sowore’s rights and securing his release. This blatant miscarriage of justice is symptomatic of closing political and media space in Nigeria.”

Over 279 Erosion Sites in Abia Under Construction – NEWMAP

We intend to make Ondo better than Edo – INEC boss