Update: Alleged Lekki rapists to appear in court on April 29

The two young men accused of sexually assaulting a young lady in Lekki some weeks back have now been arraigned before a law court.

However, the judge presiding over the case, Justice Abiola Soladoye, has chosen April 29 for the hearing of their bail application.

During the first hearing, the Deputy Director of Public Prosecution, Dr. Jide Martins, stated that the suspects, Don-Chima George, and Rasak, were former students of Babcock University.

He explained that they carried out the crime between 5 am and 7 am on February 3rd at one of the hotels in Lekki Phase One.

Martins further narrated how they took the young lady to a night club, laced her drink to get her unconscious, and then took her to the said hotel to rape her.

He emphasized that such acts are punishable under sections 258 and 409 of the Criminal Law of Lagos State. 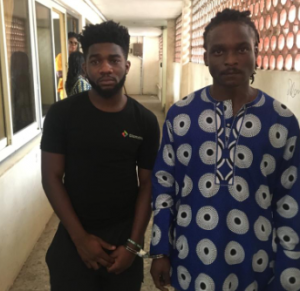 Meanwhile, the counsel to the accused, Mr. Tunji Ayanlaja (SAN), made a bail application for the suspects and challenged the prosecuting counsel for filing a counter-affidavit that the bail should not be granted.

He said,  “The defendants have been in custody since February 6. The parents of the two defendants are in court and they are of good parentage. The parents will ensure their sons attend court proceedings. From the counter-affidavit served on us by the prosecution, it seems that the crux of the objection of my learned friends is that the applicants should suffer on account of their parentage. There are no facts deposed in their affidavit except that they said they may tamper with witnesses. This will not be enough to sway your lordship as special facts for your Lordship to hold that they are denied bail. There is nothing in the counter-affidavit that should be a clog in your lordship’s discretion in admitting the boys to bail. The fathers of the boys are in court and they will ensure their attendance of proceedings.”

Martins then gave his reason for the affidavit. He mentioned that he was certain that the suspects would most likely interfere with witnesses connected to the case. He insisted that their parents’ social status will get in the way of proper justice.

He said, “ On the issue of the character of the evidence, the alleged rape happened on Feb. 3 at Delankaster Hotels off Admiralty Way in Lekki. The victim (name withheld), is a 24-year-old young lady and the hotel belongs to the father of the first defendant, Don-Chima George. The lady is well known to the defendants and second defendant, in his statement, admitted to previously spending time in her house.

“An allegation of rape for a victim is bad enough, then the allegation of rape against two people well known to the victim, who gang-raped her is absolutely condemnable. I just want to reiterate that the two defendants will not answer the bail but will flee. There is also nothing relating to the health of the defendants that will warrant their need for bail. There is no life-threatening medical condition with which the defendants could justify the court’s discretion being granted in their favour. There is also a video recording of the offence. We urge your lordship to refuse the bail application because it lacks merit.”

“Replacement Took Too Long” – Nigerians Give Verdict On Service…