Victor Adere, popularly known as Victor AD  was born in Kirikiri, Apapa, Lagos State, where he grew up with his family. He is the first of five children. He attended Heritage international school Lagos and Ekpan secondary school Warri.

In 2017, Victor AD released “No Idea”. The music video for the song which was shot and directed by Cinema House Images, Director Dindu in late 2018 was endorsed by TV stations in Nigeria.

In 17 June 2018 Victor AD released the single “Wetin We Gain” and was later discovered by his Management “LONGITUDE PROMOTIONS” in 2018 which later landed him a multi-million naira deal to-with ETINS record and Longitude Promotions are to position victor’s career globally with respect to recording and management/promotion respectively.

He posted an Instagram video of himself picking up the new car and wrote: ‘Another one to say thanks to God and my fans for believing in me.’ 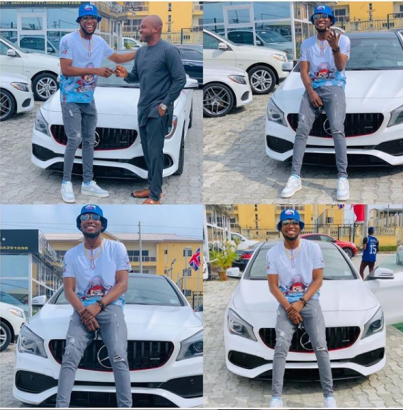 Leclerc wins Spa pole ahead of Hamilton and Vettel

This Country Is A Sick Joke!- Toke Makinwa React as Police Shut Down Venue of Bobrisky’s Party