A lady, Kayla Suber Bates, who claimed to be pregnant so that she could get gifts from her lover, friends and family for nine months and even threw a gender reveal party has been exposed as a fraud.

The supposed baby daddy’s mother, Ebony Collier took to her Instagram page, e_chameam to make the exposé on Sunday.

She said that Kayla Suber Bates lied that the supposed baby due to be born on May 21 died on May 20.

The 41-year-old woman disclosed that Kayla Suber Bates held a gender reveal party where she got gifts from her supposed baby daddy’s family and friends, hired a photographer to document the event and framed a 3D ultrasound scan of a pregnancy she found on Google.

Collier claimed that Bates planned the whole thing with her aunt, Nichole Bates.

She said that the matter was exposed when her son found the fake baby bump during the gender reveal party and they both confronted her.

Despite this, she said, Kayla Suber Bates and her aunt have continued to harass and ridicule her son using every means at their disposal.

Candle light visual coming soon. R.I.P to my fake grand baby Jade Ivy born May 21st died May 20th
Smh!! Any one that know these 2 woman be advised first pick first picture Kayla Suber Bates faked being pregnant by my son for 9 months stalked him down and came to our house lying about her entire life this girl bought and wore a fake belly from Amazon wore it for 9 months, had a gender reveal hired a photographer framed and made a 3D ultra sound she found off google the center of the gender reveal, my son found the belly and we confronted her, now she’s playing victim. 2nd picture is Nichole Bates Kayla Suber/Bates the person condoning this activity, the one she lives with hunts my son down vouch for her niece being pregnant, stress my son out for 9 months and vouched to the end, now they pull up to my house 2 cars deep full of children/ teenagers and this grown ass ghetto woman is hollering on blood and trying to fight 14 year old children, and my 19 year old daughter, But couldn’t address me like a woman when I came to her actually pull up on children these people are bat shit crazy, if seen on the street please call Netcare or the police theses people are really mentally ill we don’t know what these people are capable of, harming us or themselves, or possible trying to find another baby daddy to trap, it could be one of your sons dead ass serious this girl is sick and needs help anyone that knows her Kayla or her Aunt Niccy and cares should try make her (THEM) get some help.

“@gidi_9ja: BUSTED : A woman has gone viral after being exposed for faking a pregnancy for 9 months.

She bought a fake belly from Amazon and even threw a gender reveal party.@Gidi_Traffic pic.twitter.com/D9MjAU53LM

In yet another post, Collier said her son woke on Tuesday and found his car windows smashed, claiming Kayla and Nichole Bates orchestrated it. 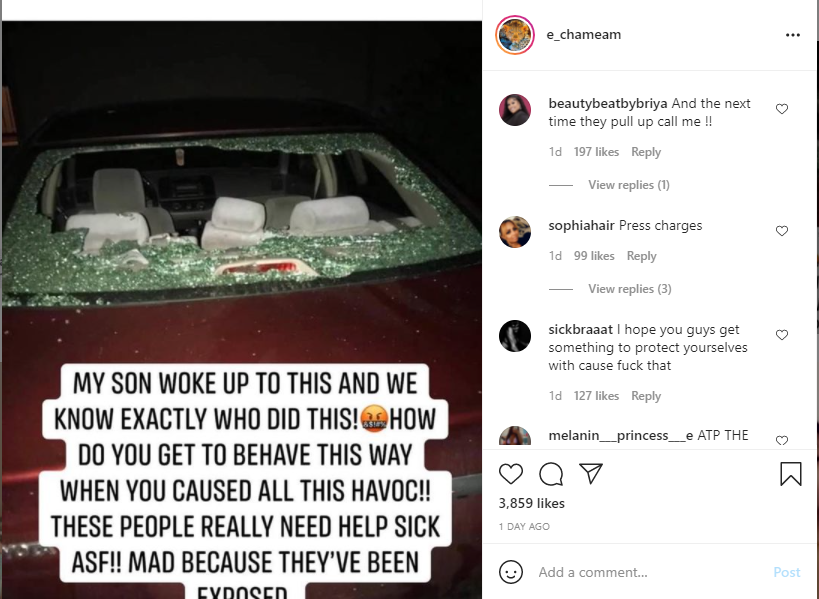 She also shared a screenshot of her conversation with Kayla Suber Bates aunt, Nichole Bates, where she advised her to call her niece to order: 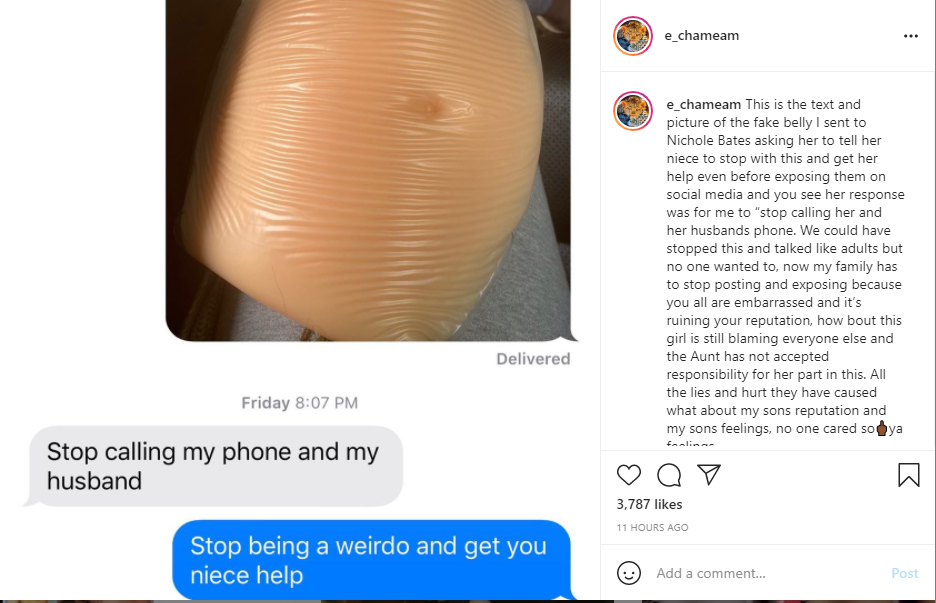