The clip, which was released almost simultaneously on the cleric’s popular YouTube and Facebook accounts, shows Joshua moving amidst congregants during his church service at The Synagogue, Church Of All Nations (SCOAN) on Sunday 26th March 2017. 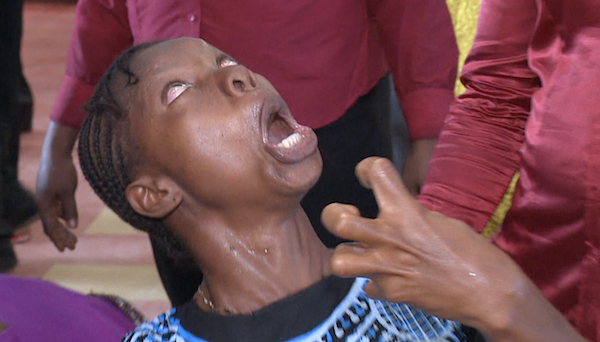 The reaction is uncanny as multiple people begin to fall, quiver and scream even without physically being prayed for by the controversial cleric.

“Demons spontaneously shriek as the anointing sweeps throughout the auditorium and freedom kicks bondage out perpetually, coupled with instant healing for the sick and afflicted,” reads part of the clip’s description on YouTube which runs for over twenty minutes.

Amidst the eerie cries of the possessed, several individuals with difficulties in walking and breathing claimed to receive healing at the touch of the pastor, including a Mexican man who travelled to Nigeria from USA to receive prayer.

Reactions to the video, which was released yesterday to YouTube, ranged from downright disbelief to the suggestion the ‘show’ was arranged for comedic purposes.

“This is crazy,” wrote a user named Sharkfinz6. “What did he say to bring all these people out?” 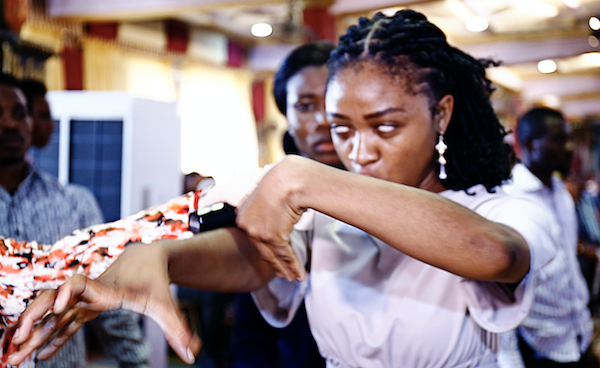 Another viewer named ‘teeonezee’ surmised, “All kinds of crazy shit is happening in this video… This channel makes such great comedy.”

“Why is this guy hitting everyone,” whimsically queried Wasila Annie. “He may hurt the audience by hitting their heads.”

However, Joshua’s supporters were similarly out in their droves to support the clip titled ‘Raw Anointing That Makes Demons GO WILD!’

“We need this anointing in Germany,” wrote Bernardo Schmitt, owner of a German Christian website.

Antonia Pasioudi from Greece contributed, “Thank You Lord for Your prophet!”

“Wow! Under the influence of the Holy Spirit, demons tremble before T.B. Joshua,” commented Rozely Lindim, an Asian fan of Joshua.

This is not the first video on Joshua’s YouTube channel, which recently surpassed 500,000 subscribers, to cause controversy.

A clip allegedly showing an encounter between Joshua and a self-professed servant of ‘Lucifer’ went viral last year, amassing over 2 million views.

Another clip showing Joshua helping the victim of a vicious armed robbery attack also surpassed one million views this week.

‘This is Why the Naira Fell Despite CBN Intervention’ – ABCON

Jangebe abduction: There must be tighter security around schools – APC

Amnesty: No pardon for criminals without repentance – Cardinal Onaiyekan