Video: Man Proposes To Girlfriend As He’s Being Arrested By The Police

A man who seems to be on his way to jail has shocked the police by going on his knee to propose to his girlfriend.

The rather shocking scene was captured on a police bodycam as the man chose the unusual time to pop the question to his girl.

The Police bodycam captured the arrested man, Brandon Thompson, who was being arrested for six felony warrants on his birthday, getting down on one knee and proposing to his lady.

Speaking on the gesture and the timing of her man, bride-to-be, Leandria Keith told Newson6: “Oh my gosh is he serious? But I knew I was gonna say yes. Like I love him a lot. We go through our ups and downs. I guess it’s like an unconditional love, you know?

“Amazing, very amazing. It feels great. I know that he loves me and I love him and we can get through anything together; There’s all kinds of situations out here, everybody makes choices everyday. I love him.

“I’m ready to spend the rest of my life with him.” 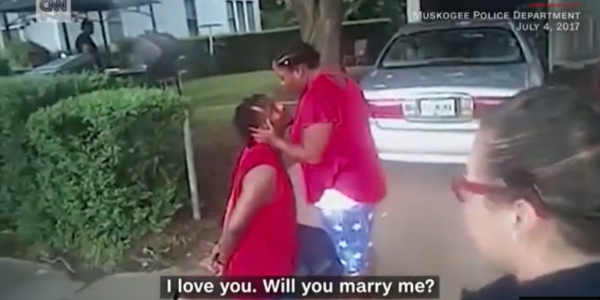 The Muskogee Police Department spokesman, Lincoln Anderson said: “When the other officer told me he was gonna propose I think my initial response was, are you kidding me?”

Anderson however hopes that the act of kindness in that the police allowed the felon to propose before whisking him away will further prove that the police is not just interested in taking people to jail> He further noted that the police are also humans and feel much of the same feelings.

He added: “Maybe by him taking this step to propose to her, so they can get married, he can take a step to getting his life together and putting these warrants behind him and improving the life of his kids and his future wife.”