It is the movie fans of the smash hit The Fast and the Furious franchise are desperate to see. And star actor Vin Diesel finally gave them something to look forward to when he revealed the new film Fast 8 will officially hit cinemas on April 2017 after sharing the film’s debut poster on Instagram.

It will be the first in the series to be fully made since the death of Paul Walker, who was killed in 2013 after a Porsche Carrera GT he was riding in crashed into a concrete lamppost and two trees at 45 miles per hour before bursting into flames.

Vin posted the picture of the forthcoming film’s poster without even attaching a caption. The image, which features the New York skyline at dawn, features the tagline ‘new roads ahead.’

Plot details have yet to be revealed. Intriguingly, and despite the New York poster, Universal is looking to make the movie the first major studio film to shoot in Cuba.

A studio spokesman said: ‘Universal Pictures is currently in the process of seeking approval from the United States and Cuban governments to explore shooting a portion of the next instalment of the Fast & Furious series in Cuba.

The film will be directed by Straight Outta Compton’s F. Gary Gray, taking over from blockbuster master James Wan.

It is expected the full cast, including Dwayne Johnson and Jason Statham, will return, though this is yet to be confirmed.

See the poster below: 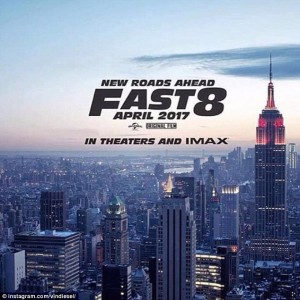