A crowd of protesters in Richmond, Virginia, brought down the statue of Jefferson Davis, the president of the Confederacy, CNN reports

According to reports, pictures showed the Jefferson Davis statue on the ground Wednesday night. Richmond police responded to the scene.
Davis was the president of the Confederate states during the Civil War. It was the second statue to come down in Richmond in two days.
READ ALSO: African Development Bank joins Nasdaq Sustainable Bond Network
On Tuesday, about 1,000 people reportedly gathered in Byrd Park during what was initially a peaceful demonstration.
But protesters vandalized a statue of Christopher Columbus, tore it down using ropes and threw it in the park.
The statues are two of many more that are coming down in cities across the US amid widespread protests decrying racism and oppression. Many say the statues — often of Confederate leaders — are considered racist symbols of America’s legacy of slavery.
Statues of Columbus were also removed this week at the Minnesota State Capitol and in Boston.
In Birmingham, Alabama, a statue of Confederate sailor Charles Linn was toppled by demonstrators and is scheduled to be removed by city officials.
Indianapolis Mayor Joe Hogsett said that a memorial dedicated to Confederate soldiers who died at a Union prison camp in the city will be removed from a local park. 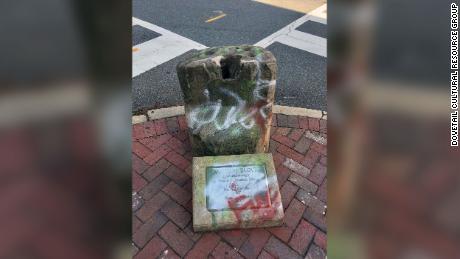 Meanwhile in Fredericksburg, Virginia, an auction block marking the spot where African Americans were displayed and sold as slaves was removed last week.
The state’s governor has also announced plans to remove another statue honoring Confederate General Robert E. Lee from Richmond’s historic Monument Avenue.
Councilman Chuck Frye Jr., the only African American on City Council, first proposed removing the block in 2017 — after the deadly “Unite the Right” rally in Charlottesville, Virginia, just an hour and a half drive away.
Frye grew up in Fredericksburg, and said, recalling his childhood memories, “I think racist folks loved it, historians understood it, and black people were intimidated.”
READ ALSO: Court Sentence Man To 4 Months Imprisonment For Impersonation