Nigeria’s Minister of Finance, Mrs. Zainab Ahmed, has revealed why subsidy removal is currently not on the list of plans for the Federal Government.

She made the claims during a press briefing, following the conclusion of the  2019 World Bank/ International Monetary Fund conference in the United States.

The program which had in attendance, the governor of the Central Bank of Nigeria, Godwin Emefiele, aimed at highlighting various economic implications of government policies, among other issues.

Zainab stated, “We are here to discuss with the global community on various policy issues. One of the issues that always come up, especially in the IMF Article IV is how we handle fuel subsidy.

“So in principle, the IMF would say fuel subsidies are better removed so that you can use the resources for other important sectors, which is a good advice. “But in Nigeria, we do not have any plans to remove fuel subsidies at this time because we have not yet designed buffers that will enable us remove the subsidy and provide cushions for our people.

“So there is no plan to remove fuel subsidy. We will be working with various groups to find out the best approach, if we have to. “We discussed this very frequently at the Economic Management Team but what is the alternative? “We haven’t yet found viable alternatives, so we are not yet at the point of removing fuel subsidies.” 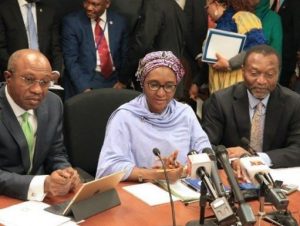 She further explained that some arrangements have been made to flush about 15 billion naira Green Bond into the agriculture, water amenities and health sectors of the country as that would help improve the lives of citizens.

Zainab stressed that there should be proper implementation when the funds start rolling in, adding that it should only be used for agricultural projects.

She said, “They must be projects that are not contributing to carbon dioxide emissions to the society. “The first green bond issuance was successful and all the projects that were scheduled to have been financed have been done and the projects are at various levels of completion.”