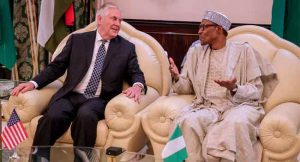 President Muhammadu Buhari has given reasons why the Federal Government chose to negotiate  with the kidnappers of the Dapchi  school girls instead  of using military force to ensure the release of the captives  from the clutches of Boko Haram.

The President gave his reasons while receiving the U.S. Secretary of State, Rex Tillerson, on Monday at State House in Abuja, his reasons being that it was imperative the girls were rescued alive with no casualties recorded.

According to the President Buhari , the government was in partnership with international organisations and negotiators, to facilitate the smooth release of the girls.

“We are trying to be careful. It is better to get our daughters back alive,”  said the president  in a statement through  his Special Adviser on Media and Publicity, Mr Femi Adesina.

The President was full of appreciation  for the United States government’s assistancein the rescue operations,  adding that Nigerian forces are efficient , “but need assistance in the areas of training and equipment.”

He promised that his administration would continue to do its best to secure the country, shortly after he visited Benue State where he met with stakeholders over the killings in the state.

President Buhari added that he would pay an official visit to Yobe State later in the week,  “as part of my condolence and sympathy visits to areas where we have had unfortunate events.”

The visiting U.S. Secretary of State complimented  President Buhari on his stance  in the anti-corruption war which the President  replied saying all monies recovered were channelled  towards developing infrastructures in the country.

Mr Tillerson affirmed the importance of Nigeria  to the U.S, as allies asserting : “You have our support in your challenges.”

“We will also support opportunities to expand the economy, commercial investments, and peaceful polls in 2019,”  said the Secretary of State.