EFCC’s acting chairman, Ibrahim Magu, has expressed his satisfaction over the effectiveness of the Whistle-Blowing Policy, urging citizens, especially southerners to participate more.

Magu stressed that the policy would help to increase the success of the anti-corruption war that the commission had been fighting.

His commendation and appeal were aired on Tuesday by the commission’s head of Public Affairs in Port Harcourt, Dele Oyewale, who was on a radio program that was aimed at increasing the awareness of the policy.

He said, “Whistle-blowing is working, and significant recoveries have been made so far by the EFCC across the country through the policy.”

Magu subsequently mentioned that the success recorded so far in other regions can be achieved in the south- south as well if residents were willing to cooperate with the commission. 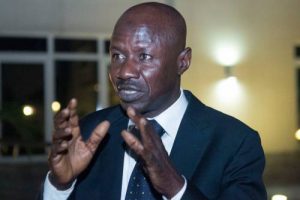 He equally reiterated that no one should hold back in fighting corruption as it would ultimately foster the development of the country’s economy.

He further explained, “We all want a nation of high per capita income; robust economy; zero hunger and functional infrastructures. This is a great aspiration but such a prospect can only materialize if we join hands together to fight corrupt practices. The whistle-blowing window is a good opportunity to achieve this and we must explore it.”

Magu also reassured that whistleblowers are safe and provisions have been made for them in the constitution.

“The Act provides that a person who makes a disclosure shall not be subjected to victimization by his or her employers or by fellow employees. Additionally, a person who makes a disclosure has the right to take legal action if he or she is victimized, dismissed, suspended, declared redundant, transferred against his or her will, harassed or intimidated in any manner,” he advised.

Also, read: Nigeria is like Afghanistan, a country haunted by the blood of innocents, it can’t make progress – By Fredrick Nwabufo