Controversial relationship blogger, Blessing Okoro has revealed how she started dating at a very young age and had to get settle down when she was just 18-years-old.

Blessing who had recently been embarrassed for claiming ownership of a house she did not own, made the revelation during an interview with OAP Daddy Freeze.

According to her, the main reason she got married at such a young age was due to her rapid physical growth plus the fact that she was seeing a man who was ten years older than she was.

Blessing narrated, “I started dating when I was 14, the guy I was dating turned out to be my husband who I got married to when I was 18. He was 10-years older than me.” 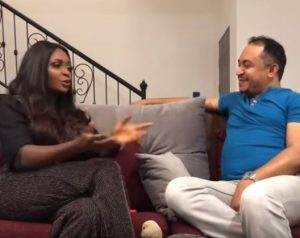 Speaking on her sex life at the time, she affirmed that she and her partner had begun to have sex years before she got married.

The blogger continued, “You know when we say I was 14, we were under ages, but we were exposed. Back then I used to lie about my age too because I was exposed and looked bigger than my age. So we dated and got married even though my parents didn’t want the marriage because they felt I was still very young.”

Blessing went on to explain that she has since ended things with her former lover and was already in a new relationship.