Why Imo is Joining OGP – Ihedioha

…Says, Era of Secrecy in Governance Over

Governor of Imo State, Chief Emeka Ihedioha says the state Government applied to join the Open Government Partnership (OGP)  as one of the ways of entrenching transparency in public service, through a statement mailed to The Herald, from the office of the Imo State Deputy Governor. 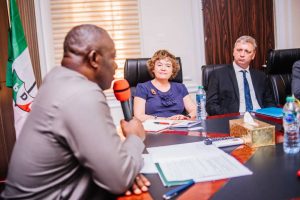 Governor Ihedioha who gave the explanation while receiving a delegation of the British High Commission to Nigeria, Tuesday, listed other governance reforms initiatives introduced by his administration to mainstream accountability in governance.

Represented by the Deputy Governor, Engr. Gerald Irona, the Governor described Imo as an investment-friendly state, reiterating the commitment of his administration to partner international organizations in ensuring good governance in the state.

“In Imo State, we are highly enterprising people and we are investor-friendly. We have very huge potentials in tourism, agriculture and education.

We inherited a state with decayed infrastructure and poor morale of citizens, occasioned by poor governance. Pensioners were owed for over eighty months and the Governor has now started paying.

Governor Emeka Ihedioha has taken steps towards restoring public confidence in governance, with the rule of law as a cardinal principle. We met an Internally Generated Revenue- IGR base of N258m monthly.

His Excellency introduced reforms to entrench transparency and accountability in governance. Through Order 005, the Treasury Single Account -TSA was introduced and as a result, so many leakages in revenue have been blocked. Last month, we generated over N800m, as against N258m that we inherited as IGR.”

“We are implementing the IPPC accounting standards. We have applied to join the Open Government Partnership-OGP, as one of our transparency initiatives. We are opening up the government for citizens’ scrutiny and participation.

We have opened an Efficiency Unit in the Ministry of Finance, with a view to reducing the cost of governance. We are investment-friendly and the Governor has set up a desk for ease of doing business in the state. We seek investments in the areas of Power, Agriculture and Tourism. Imo State is willing and ready to partner with the DFID.”

Earlier in her presentation, British High Commissioner to Nigeria, Catriona Laing said they were in the state to identify areas of possible support through the Department for International Development.

“We are in your state to get a better understanding of what is on the ground, with a view to knowing how we can support governance in Imo State. We have programmes that will be beneficial to you. We also wish to understand the challenges you are facing in the state.”

Reps to engage governors on autonomy for judiciary

“No one is giving up hope here” – Presidency assures of Chibok…