A Facebook user, Jessica Taylor Omamuli whose husband was transferred to Ughelli, Delta state claims that her husband’s mistress OAP Divine Ighovie barged into her home with thugs, beat her up, stripped her naked and recorded the incident.

The wife and mother, who according to her Facebook profile, is a Senior Consultant at Taylora Odinz said she had gone to the Police to report the incident and that the OAP is now in hiding.

Read what she wrote after the cut. 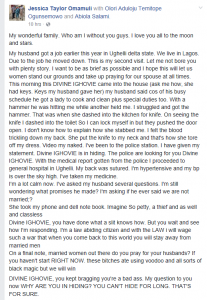 My wonderful family. Who am I without you guys. I love you all to the moon and stars. My husband got a job earlier this year in Ughelli delta state. We live in Lagos. Due to the job he moved down.
This is my second visit. Let me not bore you with plenty story.

I want to be as brief as possible and I hope this will let us women stand our grounds and take up praying for our spouse at all times. This morning this DIVINE IGHOVIE came into the house (ask me how, she had keys. Keys my husband gave her) my husband said cos of his busy schedule he got a lady to cook and clean plus special duties too.

With a hammer he was hitting me while another held me. I struggled and got the hammer. That was when she dashed into the kitchen for knife.

On seeing the knife I dashed into the toilet So I can lock myself in but they pushed the door open. I don’t know how to explain how she stabbed me. I felt the blood trickling down my back. She put the knife to my neck and that’s how she tore off my dress. Video my naked. I’ve been to the police station. I have given my statement.

Divine IGHOVIE is in hiding.

The police are looking for you Divine IGHOVIE. With the medical report gotten from the police I proceeded to general hospital in Ughelli. My back was sutured. I’m hypertensive and my bp is over the sky high. I’ve taken my medicine. I’m a lot calm now.

I’ve asked my husband several questions. I’m still wondering what promises he made? I’m asking if he ever said we are not married;? She took my phone and dell note book. Imagine So petty, a thief and as well and classless Divine IGHOVIE, you have done what a slit knows how. But you wait and see how I’m responding. I’m a law abiding citizen and with the LAW i will wage such a war that when you come back to this world you will stay away from married men

On a final note, married women out there do you pray for your husbands? If you haven’t start RIGHT NOW. these bitches ate using voodoo and all sorts of black magic but we will win DIVINE IGHOVIE, you kept bragging you’re a bad ass. My question to you now WHY ARE YOU IN HIDING? YOU CAN’T HIDE FOR LONG. THAT’S FOR SURE. 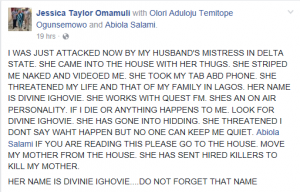 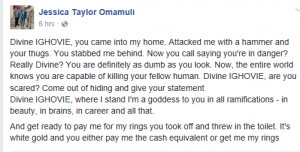 Popular Pastor Dies From Overdose of Viagra in Hotel Room