Willian wins it for Chelsea, Tammy Abraham and Victor Osimhen also on target.

Chelsea’s forward Willian latched on to a Callum Hudson Odoi’s cross with a sweetly struck volley to give Frank Lampard his first champions league win of the season. Tammy Abraham gave the away side the lead in the first half but FC Lille’s, Nigerian striker,  Victor Osimhen restored parity for the home side.

The French were later undone when substitute Callum Hudson Odoi put in a delightful cross for Brazillian, Willian which he caught in the sweet spot with a well executed volley to finish superbly for Chelsea’s second goal and the game’s winner.

Chelsea boss Frank Lampard set his side up in a 3-4-2-1 formation giving starts to younsgters 19-year-old Reece James and Fikayo Tomori, 21.

Goalscorer Osimhen, bought as a summer replacement for Arsenal-bound Nicolas Pepe, caused problems in the air and it was his header which brought Lille level only 11 minutes after Abraham had given Chelsea the lead.

Benjamin Andre’s header was tipped past the post by Kepa Arrizabalaga, and the Chelsea keeper had a couple of nervous moments when he was forced to come out to the edge of the box to stop quick counter-attacks. 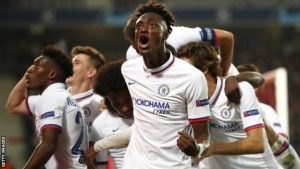 Tammy Abraham who spent last season on loan with Aston Villa was given the opportunity to lead the line for the Blues and he has hugely impressed with seven goals form as many league games this season. He also bagged an assist in the Uefa Super Cup defeat to Liverpool.

James became the first teenager to start for Chelsea in the Champions League since Ruben Loftus-Cheek in 2015 and was a threat from right wing-back – delivering dangerous crosses and using his pace to exploit the space in behind.

And Tomori was excellent at the back, while also recording his assist.