What Wizkid Told Me – Saraki

Senate President, Dr Bukola Saraki has disclosed the details of a conversation he had with superstar Nigerian musician, Wizkid.

He made the revelation in his keynote address at the Georgetown University African Business Conference in Washington DC, United States on Saturday.

Saraki said that the artiste, who is widely regarded as Nigeria’s biggest music export, told him how he (Wiz kid) sold out 40,000 tickets for a concert in Gabon, a Francophone country.

The former Kwara state governor said Wizkid also told him that he was astonished that Gabonese fans could fill the venue of his concert despite not understanding a word of his lyrics.

Saraki said, “Our Entertainment industry, which has grown tremendously over the last 20 years – provides us with value addition and comparative advantage – as our artists have risen from local champions to global recognition.”

”Nigerian musician Wiz kid recently sold out London’s prestigious Royal Albert Hall and is much sought after for collaborations with major American Music artists.  Whilst interacting with Wizkid recently, he told me he filled a stadium  of 40,000 in Gabon a french speaking country where they didn’t understand a word of his lyrics; and he himself was astonished.”

The message was officially addressed to the Senate President Dr Abubakar Bukola Saraki. 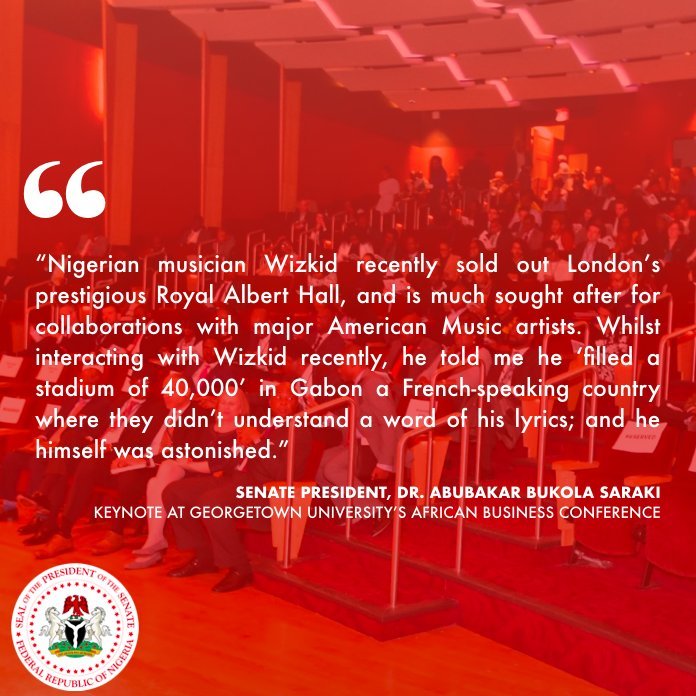 JUST IN: Sound Sultan Diagnosed With Throat Cancer In America