WNBA star Layshia Clarendon has undergone successful surgery to have her breasts removed.

The basketballer who identifies as transgender and nonbinary made the announcement on social media on Friday January 29. She reportedly underwent the surgery on January 13 and is recovering well.

Layshia Clarendon also expressed hope of the surgical process inspiring trans people. She wrote on Twitter: “I’m usually not scared to share news publicly but the amount of hate, myths & ignorance actually had me debating sharing this joy.

“I had Top Surgery! I’m feeling free & euphoric in my body & want Trans people to know and see that we’ve always existed & no one can erase us!” 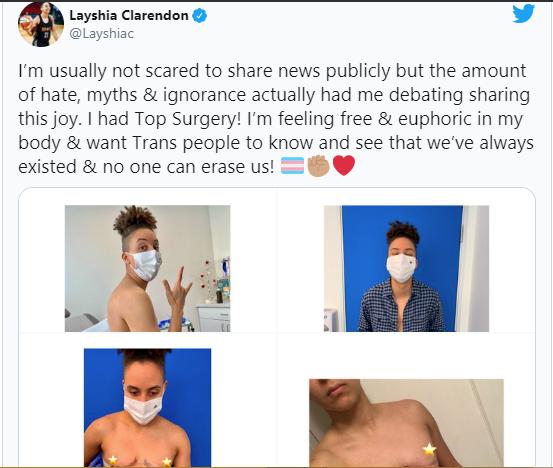 WNBA Commissioner, Cathy Engelbert who reacted to this wrote: “Layshia’s story is one of inspiration and courage, and as a takeaway from the emotional conversation we shared recently, my hope is that the WNBA’s full support will extend far beyond this league.

“We are so proud Layshia is part of the WNBA and we know that their voice and continued advocacy will not only support and help honor and uplift many other non-binary and trans people, but also encourage empathy and understanding for the community across all levels of sport.”

The Liberty also released a statement in support of Clarendon. It read: “The New York Liberty family is in full support of Layshia Clarendon and their choice to live authentically.

“The Liberty has been and will continue to be an organization that celebrates the individuality of all people. Layshia is a proud embodiment of our belief that our strength lies in our truth and no one should live constrained by societal boundaries.

“Layshia’s journey as a pioneering athlete, along with their activism and advocacy work, is an inspiring call for each of us to honor our humanity above all else.”