“You won’t believe this, but it’s the truth” Abba Kyari Reveals All He Did To Arrest Billionaire Kidnap Kingpin, Evans

The Head of the Intelligence Response Team, Assistant Commissioner of Police Abba Kyari has revealed how he arrested the billionaire Nigerian kidnap mastermind, Chukwudi Onuamadike popularly known as Evans.

Abba Kyari while speaking on the arrest revealed that he had to do some odd things including taking a commercial motorcycle ride in order to enable him move faster to the Magodo GRA Phase II residence where the suspect was arrested.

The Point reported that Kyari disclosed that he feared that delay might disrupt his plans to arrest the kidnap kingpin and thus, in a bid to avoid the usual Lagos traffic jumped on a commercial motorcycle from his Ikeja GRA location to Magodo GRA Phase II to arrest Evans.

Abba Kyari said: “In the early hours of Sunday at about 1.30am, Evans and some of his gang members went out to a club around Ikeja and returned at 5.10am. So, we were very sure Sunday would be our day. So, I decided to go and cleanup myself and have a little rest before I returned to Magodo.

“I was still resting when my guys called that the target was set; that it appeared he wanted to go out. So, I had to take Okada from where I was, to meet up.

“You won’t believe this, but it’s the truth. Do you know that when my surveillance team alerted me of the suspect’s presence at his Magodo mansion, I had no other option than to take Okada from where I was at Ikeja GRA to Magodo?”

Kyari was reported to have further disclosed that sometimes, policemen have been forced to do unconventional things to make arrests happen. He noted that though it may sound funny, but it is true.

He continued: “I was approaching former tollgate, when I got another call that he might drive out any moment. So, I instructed my guys to give him warning shots; that was to announce our presence, and that kept him indoors until I got there and directed the affairs.”

The IRT boss further added that himself and his team had been pursuing Evans’ case for close to 10 years.

“We have been following him, through intelligence gathering and surveillance, but we have always lost him. He is a very intelligent criminal with a very sound IQ, I must tell you.”

Speaking on the groundwork which led to the arrest, Kyari revealed that his team mounted a surveillance on Evans five days before he was finally arrested.

“When we tracked him to Lagos, I was in Abuja. The moment I was sure he was in Lagos, we moved down to Lagos on Monday of that week. We came by road and slept at a police station close to Evans’ residence and started our surveillance on him.” 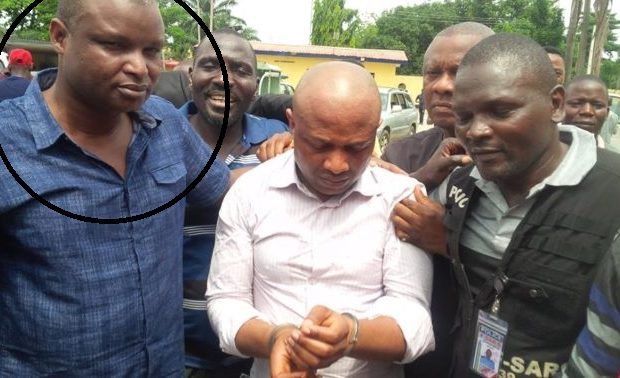 EU donates vehicles, other items worth N249m to Jigawa Govt.8