Police suspect that a female student known as Happiness was killed and had her private parts and other organs removed by internet fraudsters.

Happiness who was newly admitted into Delta State Polytechnic Ozoro went missing on January 25th after heading out from her hostel to celebrate her birthday at a bar in Ozoro with some male friends.

A Punch correspondent stated that she left her room on Thursday with her mobile phone telling friends she would return home and never came back.

Her body with its missing organs were discovered in an open space near a secondary school in Owhelogbo Road. She was missing a breast her eyes her heart and her privates.

an anonymous friend told the correspondent that she was dating one of the internet fraudsters.

“When her roommate didn’t see her around 7pm on the day she went for the party, she called to know her whereabouts and Happiness said she was in Oleh and would return home soon.

Her roommate called repeatedly around 9pm, but her number didn’t connect. The same thing happened the following day. It was at that point that the roommate raised the alarm that she was missing.

Family members and friends had been searching for her until last Friday when her mutilated body was found along Owhelogbo Road.”

Another friend stated that the roommate had since been arrested by police for interrogation. 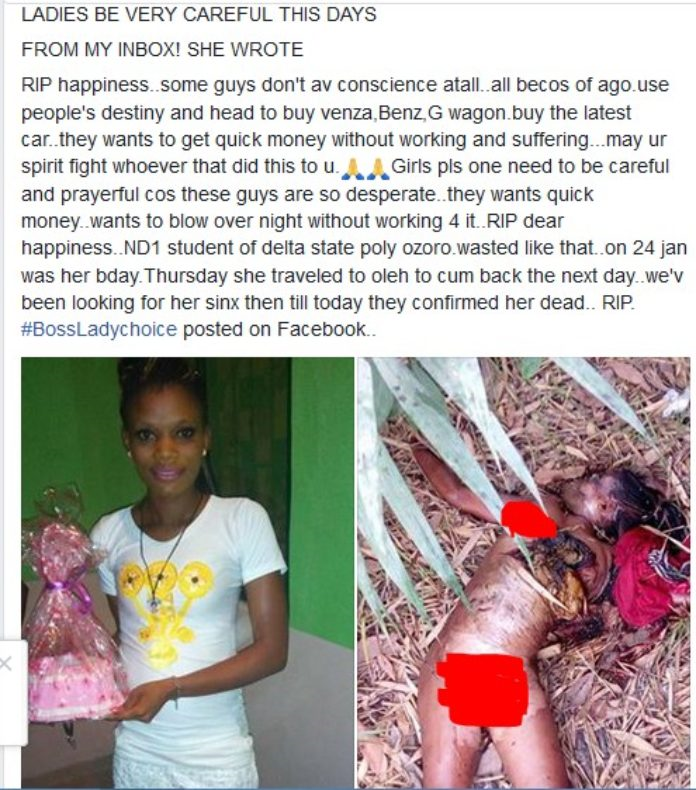 Facebook At 14: “I’ve Made Every Mistake You Can Imagine”- Mark Zuckerberg

Did Davido Buy His Biggest Hits? 6 Songs That May Not Have been Written By Him