Hamid Bhatti, a 24-year-old teaching  assistant is facing trial for having  a sexual  relationship with his pupil, a 15-year-old girl.

According  to reports, the girl’s mother  found a written note sent to the daughter by Bhatti where he talked about their romantic affair.

In his note,  he said ” you were amazing last night, just as always “.

The young girl had been carried away by his appearance,  after seeing him in an art class. He developed an interest in her and spoilt her with gifts such as jewellery and love notes, before he eventually had sex with her in his house, while her teenage friend slept on his bed.

Bhatti has now been charged with five counts of sexual  activity with a child at least 14 times between May 2014 and February 2015. He denied all the charges levelled against  him including for the abduction of the minor as she went missing.

Prosecuting counsel,  Lee  Bremridge said: “The crown says that he was fully aware of the girl’s age. A sexual relationship started between  the both of them when he worked in her school as a teacher, and she was a pupil. That sexual relationship continued from May 2014 into 2015 which was the reason why she was ready to defend him by lying to protect him.”

Despite the fact he was sacked by the school, they both maintained they never had a sexual relationship.

Mr Brembridge added: “She said even though she had a crush on Mr Hamid Bugatti, and had stayed over at his house, they never had sex. The girl was clearly protecting him because it was obvious they were both having sex but she didn’t want the police to know”.

In October 2014, the girl’s mother involved the police after she found a note written  to her daughter  from Bhatti.

The note read “Hey baby, I am sorry I had to leave for the work this morning. You were amazing  last night as always.

“I hope you get this  message and leave me a note. I plan to see you soon. I love you. please don’t forget to go to the doctors.”

Police saw a used condom, with the girl’s DNA found in the semen sample during the search in his house.

Mr Hamid was subsequently arrested  and charged with having sexual  activity  with a minor. 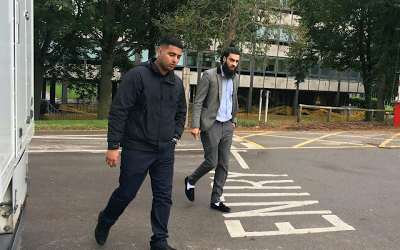