Zenith Bank has once again demonstrated its generosity towards the society as it tops the list of the biggest donors to the Lagos State Security Trust Funds (LSSTF) in 2019.

The bank, which just rounded off its yearly event, StylebyZenith, with a bang on Sunday, was honoured at the LSSTF event tagged “Transformational Security’ and organised by LSSTF at the Civic Centre, Victoria Island, Lagos, on Tuesday.

Zenith Bank topped the list with a donation of N300 Million and was followed by Guarantee Trust Bank,  XENON Construction Ltd, Access Bank and Femi Otedola. 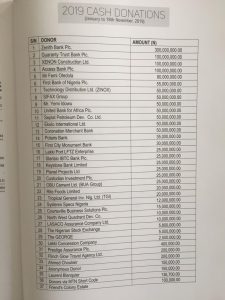 The Governor of Lagos State, Babajide Sanwo-Olu, who spoke at the event commended the initiative which is aimed at promoting security in the state.

“The present administration under my watch also introduced new security strategies to combat security issues including making available new equipment for our security agencies,” he said.

“We have revitalised security strategies to combat security coverage in Epe and Ikorodu waterways and other areas through a regional security outfit code-named ‘Amotekun’, to combat banditry and Kidnapping.

“Also with the ongoing road upgrades across the state, I believe that we can achieve significant improvements in the security of our State.”

Style By Zenith event which took place over the weekend was organised by Zenith Bank to create platforms for entrepreneurs in Africa to showcase their businesses to the general public.

Zenith Bank gave stands to hundreds of entrepreneurs, both large and medium scale business owners, at no cost.