2 men hypnotize, rape, swindle lady to the tune of N1.4m in Ibadan

Two suspected criminals are currently in police net after they allegedly raped and defrauded a lady of over one million naira in Oyo State.

The suspects, Taiwo Salami and Komrudeen Amusat, were said to have hypnotized their victim who was on her way to deposit the sum of N1.4 million given to her by her who she works with as a sales girl.

Taiwo and Kamorudeen subsequently collected the money after they had raped the lady repeatedly.

While narrating the information already gathered on the case, the Commissioner of Police in the state, Shina Olukolu, revealed that the incident occurred around 12 pm on May 6, 2019, at Dugbe, Ibadan. 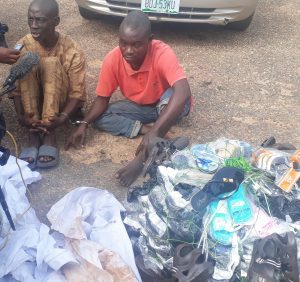 He said, “On her way, she was accosted by one of the suspects, Taiwo Salami, who hypnotized her and having lost her senses, she was taken to an abandoned house at Inalende area of the city, where the cash was collected from her, while the suspects also inflicted several injuries on her.  On May 8th, the victim’s family members reported her disappearance at the divisional police headquarters at Mokola. She was later rescued and taken to the hospital for medical attention.

“The case was then transferred to the State Criminal Investigation Department, and on June 7th, following a tip-off, the suspects were arrested around Eleyele, and upon interrogation, they confessed to the crime,” Olukolu said.

In his confession, one of the suspects stated, “She then followed me to Inalende area, where she was kept in a room in an abandoned building and the money collected from her.”

The CP later assured that the suspects would be arraigned before a law court in due time.

Aminu Muhammad: Aisha Buhari allowed weight insecurity to get the better of her…