Armed bandits suspected to be herdsmen attacked a village in the Ubabai council ward within Guma Local government area if Benue state on Tuesday.

The attack which happened late in the night claimed the lives of 10 community dwellers.

Reports have it that the attackers just began to shoot sporadically in different angles as soon as they infiltrated the village, taking the villagers by surprise.

While speaking with newsmen, a source claimed, “The people were sleeping in front of their house when the gunmen arrived.

“They shot at them and immediately ran away. So,  no one can say who killed them.”

However, while expressing his displeasure about the incident, the chairman of Guma Local Government, Richard Shaor, stated that some herdsmen are most likely responsible for the attack. 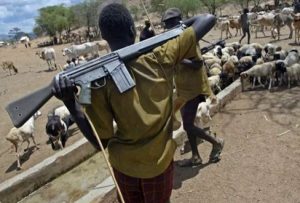 Richard stated, “On Monday someone was killed by herdsmen before the incident at Tser Uoreleegeb.

“The same herdsmen went to this community on Tuesday night and killed 10  people who were sleeping outside.

“Their remains have been buried  because the villagers insisted  that the corpses  should be brought to the village for burial.”

Catherine Anene, the police spokesperson in Benue state, has also reacted to the shootings.

She explained, “The Divisional Police Officer in Guma has confirmed the incident. He said he saw five corpses at  the burial ground.”

The Commander of Operation Whirl Stroke, Maj Gen  Adeyemi Yekini,  said, “Investigations into the attack in Guma is ongoing.”

Speeding, recklessness of drivers cause accidents, not bad roads – Fashola

My husband made heaven – Ajimobi’s widow