Following the scandal involving Fidelity bank in which a Bank manager for the Bank allegedly ordered the beating of customers by security guards, the bank has released video footage which it hopes will serve as a defence for the bank.

The bank through its Twitter account released CCTV footage of the alleged incident, but eagle-eyed Nigerians have accused Fidelity of doctoring the footage.

The 1minute 54 seconds video seemed to show the customers as the aggressors against the security officers who seemed to be defending themselves.

However, there seemed to be a time skip in which 40 seconds of the footage disappeared and no one knows what happened in that time.

Recall that it was reported that two customers came into the bank to complain about the bank’s ATM services, but were beaten by security guards after they insulted the bank. The beating was said to have been ordered by the bank manager who was allegedly incensed by the insulting tones of the customers.

Countering Fidelity Bank’s claim, a Twitter user, Dare Akinniyi said; “The video jumped from 11:07secs to 11:57secs? Where is the other part? About 40secs edited. #TheLongStory @segalink”

Also disagreeing was Nkechi Oliseh who said: “But why do you ppl never learn? Haven’t you noticed Nigerians are too smart for this? U doctor a recording and share it as evidence? On Twitter? U have just provided the ammunition.”

Fidelity bank had earlier issued a statement that the customers had ‘shoulder surfed’ the security guard and left him with a bleeding eye. They also denied that any manager of the bank ordered such an act of violence. 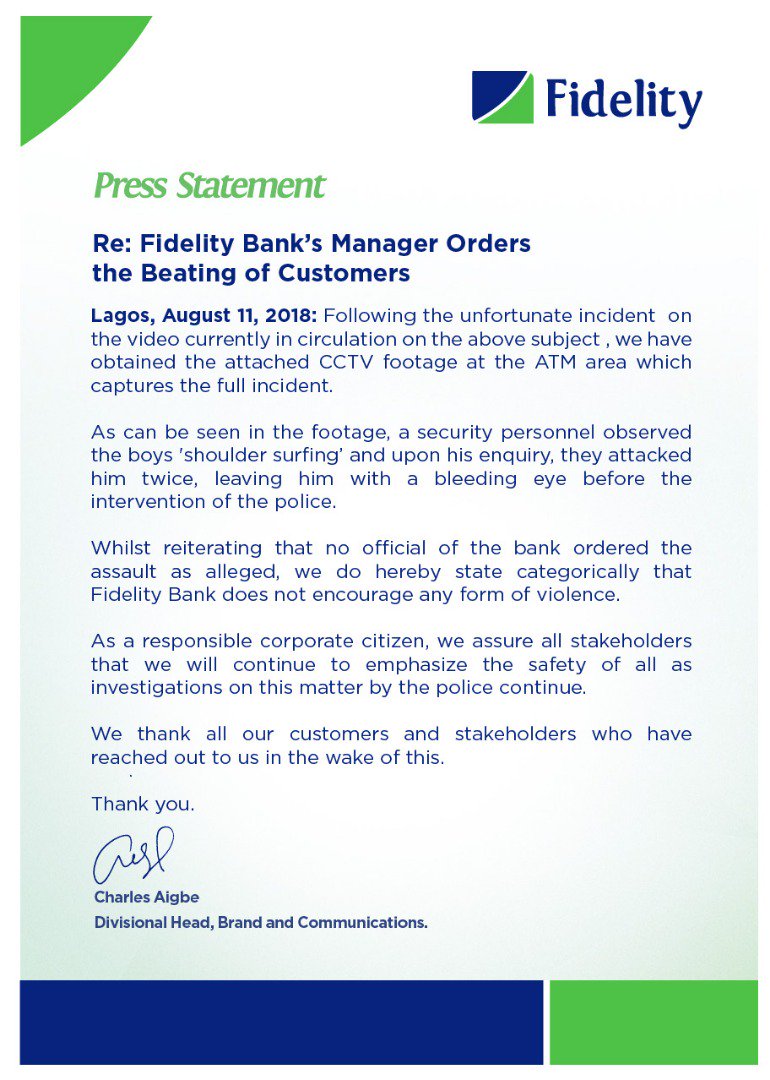 Please see the CCTV footage obtained from the unfortunate incident.
Re: Fidelity Bank's Manager Orders the Beating of Customers.

Another Twitter user, Integrity, also argued that the clip was edited and that all that’s visible is two people engaged in combat.

He said: “The clip has been edited. In the court of public opinion which you have brought this case, we think you are hiding evidence. Why did the video skip? We could see two fighting… That’s all”

A Ghanaian Twitter user alluded to Nigerians’ reluctance for activism stating that a similar incident happened in Ghana and the bank closed down.

He tweeted: “When this shit happened in Ghana, the police was arrested, citizens withdrew their monies in solidarity the next day, the bank is still closed… Nigerians will make noise on sm”

When this shit happened in Ghana, the police was arrested, citizens withdrew their monies in solidarity the next day, the bank is still closed… Nigerians will make noise on sm

Check out some other responses below

Just as the bank name says fidelity,so trust and transparency is key why show a video that as a lot of question mark nobody force you to do this, so if u must do this,then do it rightly

There are 2 jump-cuts in the video which could be very vital in this case. What happened in-between those cuts?

When you have the complete video then up I can try again bit this is a blatant failure.

Fidelity Bank is yet to respond to this new allegation and it remains to be seen what happens next.