Barcelona are considering parting ways with Ousmane Dembele for good come summer, according to reports in Spain.

The Frenchman made his way back to training after a horrendous hamstring injury which kept him out for over seven months. Barcelona even signed another player, Martin Braithwaite, in the meanwhile as they were sure of Dembele’s unavailability for an extended period.

Currently still attempting to regain his fitness, Dembele returned to training ahead of Barcelona’s home clash with Napoli in the second leg of the UEFA Champions League round of 16 tie. However, it did not end well for the 23-year-old.

Dembele had an outside chance of making it to the squad, if not the XI, for Barcelona’s crunch clash with Napoli at the Nou Camp. However, it was clear upon his first training session in months that he will continue to remain sidelined.

The talented 23-year-old reportedly underwent light training sessions on Tuesday and Wednesday, and suffered another setback. His hamstring caused him issues again, and it did not react as the doctors hoped that it would.

The French star underwent a surgery in Finland, conducted by Dr Lasse Lempeinen, for the same hamstring issue that constantly caused him discomfort. Dembele left training and is set to continue his recovery process, with the timeline still being uncertain.

Barcelona, fed up of Dembele’s recurring injury woes, are reportedly exploring the options of shipping him out either by selling him or offering him as part of exchanges with other clubs. However, this, unfortunately, isn’t up to Barcelona as they will require potential suitors to come forward for the player they purchased for upwards of €100m.

There have been whispers of both Liverpool and Manchester United’s interest in the French forward. However, the former are said to be looking at cheaper alternatives, while the latter reportedly view him as an alternative to Jadon Sancho. 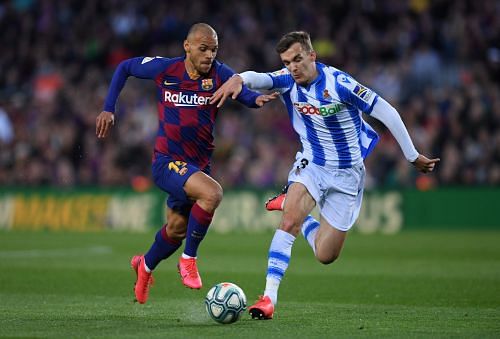 Should there be no suitors for him, Barcelona will be forced to keep him and hope that he recovers in time for the upcoming campaign. As things stand, there is a very good possibility of him not being fit for the start of 2020/21, given that he is nowhere near being fit enough to play in early August.

The football calendar has seen drastic changes due to the COVID-19 pandemic, and players aren’t likely to get too much of a rest between seasons. Due to this reason, Dembele could realistically miss the first few games of the upcoming LaLiga Santander campaign, if not more.

It appears that Dembele’s career in Barcelona is ultimately coming to a slow and painful end. He’s managed to amass just 494 minutes of football this year, scoring one goal in the process.

READ ALSO: “Muslims should use this period to pray for peace and an end to COVID-19”- Ganduje