Buhari has failed, Nigeria’s economy at an all time low – US Economist, Steve Hanke

Top American Economist, Steve Hanke has dealt President Buhari’s administration a low blow after he described his governance a failure that has plunged Nigeria into deep financial crisis.

Hanke who is an Applied Economist at John Hopkins university in Baltimore, used a graph to show that inflation rate increases by 30 per cent annually in Nigeria.

The Professor characterized Buhari-led administration by banditry, insecurity, high unemployment rate and corruption, claiming the President has failed his people.

Hanke, a former columnist on Forbes magazine and Senior Adviser to former US President Reagan said it was frightening that Nigeria’s unemployment rate stood at 27.1 percent with no solution in view.

The Financial Expert who made his analysis in a tweet has had over 12,000 retweets with many Nigerians and foreigners backing up his claims.

#Nigeria is in the grip of chaos.

The government can’t protect its own citizens from #BokoHaram or the #Corrupt police. 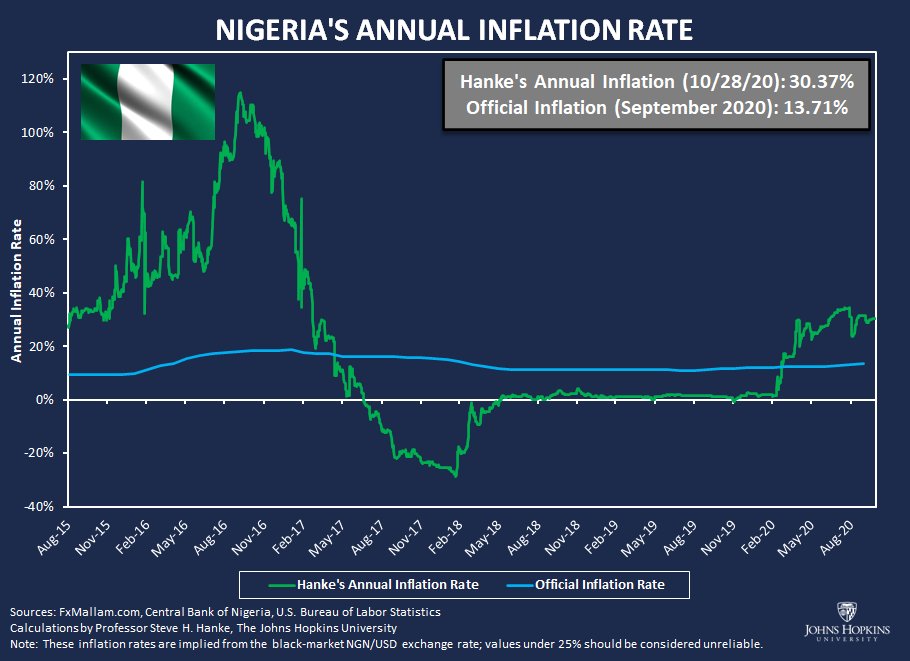 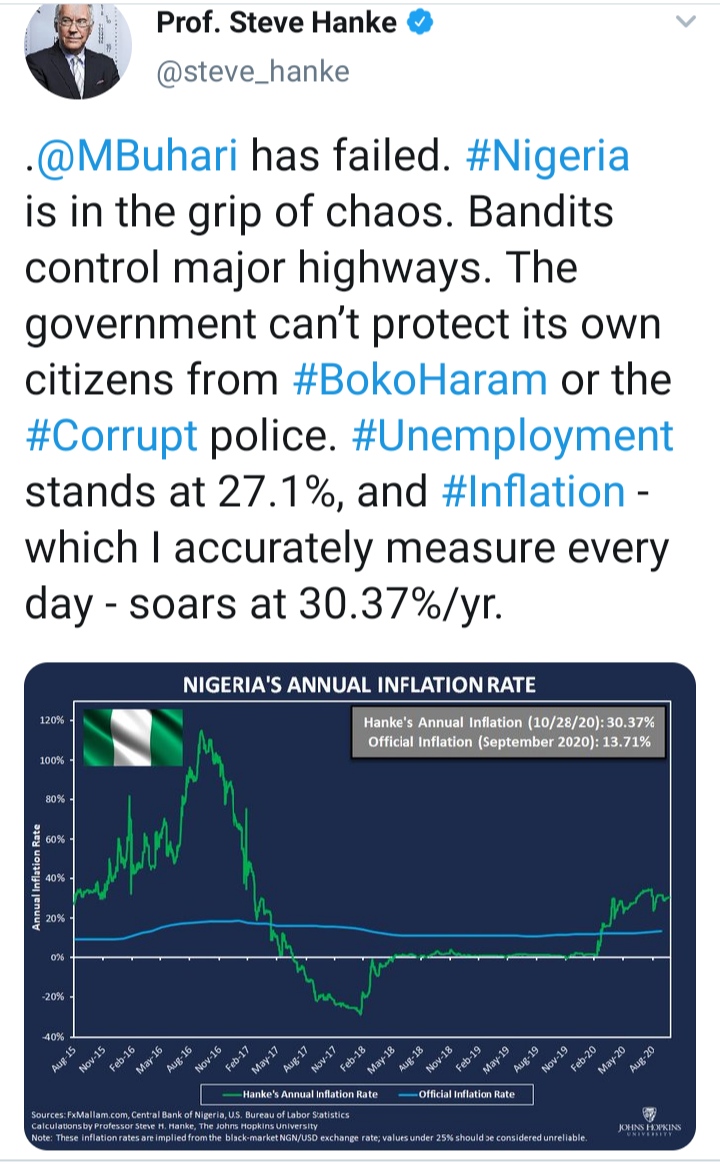 It’s not only the Judiciary/Legislature, there’s no MDA that has not been abused under this regime,

also we’ve dropped in all rankings of progressive indices.

💯 correct! Everything & every Institution bastardized! Nepotism in full gear wearing the deceitful garment of “integrity”!

Yet the minister of transportation is borrowing opaque loans for third rate railway system, that is the most expensive standard gauge in Africa to further enslave the youths and future generations. Lol.

Prof. thanks for this highlight. @MBuhari & his APC team failed woefully. We haven’t had it so bad like this before. This gov’t represent #hunger #poverty #SystemicGenocide #unpatriotism #curruption

Global leaders of thought worldwide are you seeing this?

Hey Steve ur statistics is not a bad 1 buh I feel it’s more dan dat cos, dere’s serious chaos in Nigeria presently. Mismanagement of public funds by d president & his cabals is extraordinary, way out is what we’re craving 4 cos of d unborn generations #EndBadGoveranceInNigeria

Resolving structural issues are fundamental to improving these conditions but sadly avoided. It will be a race to the ground if things continue this way.

A leader must have emotional intelligence to lead. Nigeria is unique.

A single pronouncement of positivity from the president can turn this country around economically That pronouncement can be his resignation at most or firing under performing appointees at least. But hey..

We need to toss this 1999 constitution out the widow. It is the bedrock of corruption, nepotism, injustice, poor growth, and inequality of all kinds. Until then, we can’t change anything.

Succinctly put. Nigeria is on auto pilot in Buhari, no direction no progress no hope for her teeming youths. Thanks for adding your voice @steve_hanke

Our @OfficialAPCNg will simply give excuse or say you are sponsored to talk. Some of these issues raised are critical matrix for measuring good governance.

Unemployment 27.1%? So untrue…unemployment in nigeria is nothing less than 60% people are graduating everyday but no jobs,..only the priviledged, connected and lucky few get jobs…