Buhari’s silence is ominous, Is he alive? – Fani-Kayode

Former Minister of Aviation, Femi Fani-Kayode has expressed worry over the continued silence of President Buhari on the recent Lekki shootings.

Fani-Kayode disclosed it was hard to believe that a sitting President could be quiet in the face of chaos bedeviling his people.

The former Aviation Minister gave voice to the rumors and conspiracy theories that the person ruling Nigeria may not be the actual President.

Nnamdi Kanu, Leader of the Indigenous People of Biafra (IPOB) in times past, made several allegations that Buhari is dead and an impostor from Sudan, Jibrin occupies the presidential seat at Aso rock.

Although, the claims have been disregarded as untrue, many Biafra agitators opine there may be a modicum of truth in Kanu’s claims.

However, Femi Fani-Kayode expressed concern over the deafening silence of the Nigerian Leader after military officers opened live rounds on unarmed protesters at Lekki toll gate.

“The country is tense. Fear everywhere. Parts witnessing curfews, mob rule, mass murder, burning & anarchy. Children killed by soldiers. Trad. rulers chased out of palaces by mobs. All this yet our President has not said ONE word. This is ominous. Something is in the offing.

“Besides that, do we actually have a President? Is Buhari still alive? Can a President be alive and witness his country falling apart and say NOTHING to encourage or inspire his people? And if he is not alive who is the person in the Villa running the affairs of our nation?

“The only reason I believe we may still have a President is because the President of Ghana @NAkufoAddo said he spoke to him yesterday and that they discussed the deteriorating state of our nation. What we do not know is whether he spoke to the real Buhari or to an imposter.” 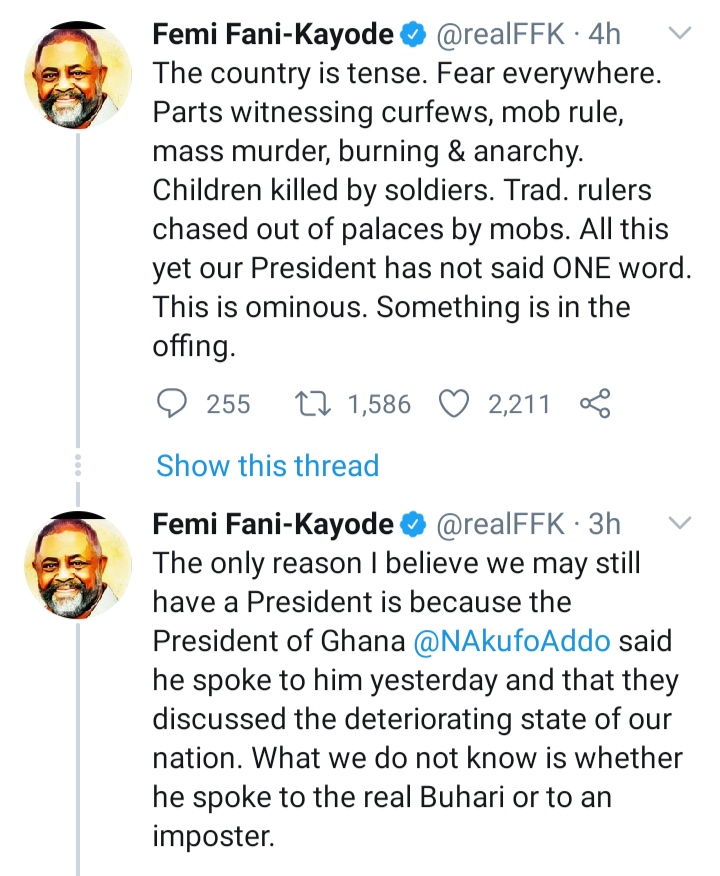 Despite Recession, Lai Mohammed claims “Nigeria’s economy is well under…