Veteran author Chimamanda Ngozi Adichie has become the first Nigerian to be awarded the Mary McCarthy Prize for her thought-provoking novels and charismatic public presence.

The McCarthy award according to Silverbird TV, which is named after famous novelist Mary McCarthy who taught at Bard for a year, is given in acknowledgement of engagement in the public sphere by an intellectual, artist, or writer. 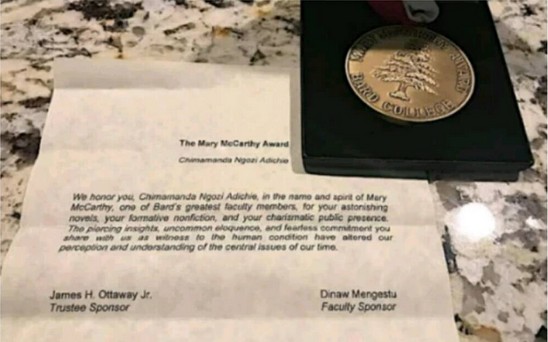 She became the first Nigerian to receive the prestigious award at an event that held at Bard College, New York recently.

The Mary McCarthy Prize in short fiction includes a cash award, publication of a collection of short stories, standard royalty contract and a short novel or novella, PM Express

Chimamanda’s first novel Purple Hibiscus published in 2003 won the Commonwealth Writers’ Prize and has been translated to over 30 languages.

Her second novel Half of a Yellow Sun (2006) won the Bailey’s Women’s Prize which is the world’s top prize for female writers.

Her novel Americanah (2013) received the National Book critics Circle Award including many other recognitions like been in the list of the New York Times’ Top Ten Best Books of the Year.

Her most recent book, a Feminist Manifesto in Fifteen Suggestions or Dear Ijeawele, was published March 2017.

Chimamanda is also a recipient of MacArthur Foundation Fellowship and was recently conferred with honorary degree from Haverford College and Williams College.

Southampton Sack Puel As The Search For New Management Gets Underway