Coco Gauff has had a dreamy Australian Open so far defeating Venus Williams in what’s becoming a habit and seeing off defending champion Naomi Osaka.

But all that was brought to a halt when fellow American Sofia Kenin applied the break to her acceleration at the tournament beating her 15-year-old opponent 6-7 (5-7) 6-3 6-0 to the 14th seed in Melbourne.

She came out firing on all cylinders in the first set but was undone by a patient Kenin whose tactics seem to be about wearing out her teenage opponent and it worked a treat. She was completely blown away in the final set of the match.

After an intense warm embrace, Kenin and Gauff broke into tears on the court. The 21-year-old cupped her face after dropping her racket as she reached her first grand slam quarter-finals.

“I was just fighting,” Kenin said. “She played some good points at crucial moments but I just had to calm down and relax.”

Gauff was received to a standing ovation at the end of the match.

“I’m doing well right now at 15. I still have so much I feel like I can get better on,” said Gauff, who will rise into the world’s top 50 for the first time next week.

“I don’t even think this is close to a peak for me, even though I’m doing well right now.” 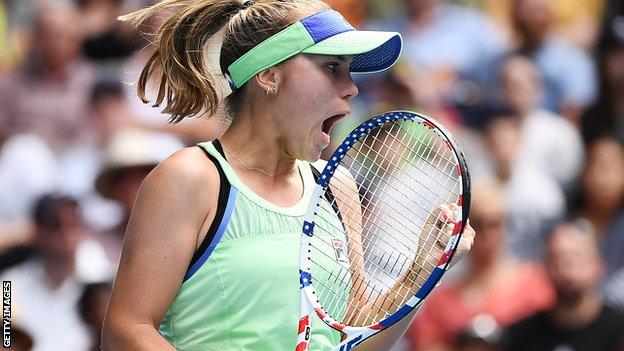 As Gauff struggles became apparent, the older American took complete charge of affairs racing to the winner in just 33 minutes.

“She definitely put a lot of balls in the court. She’s quick. Also her drop-shots were good,” said Gauff, who won just 15 points in the final set.

“I think I made a lot of errors too.”

Gauff lost to Osaka in the US Open last year but she did learn some vital lessons which she showed the world in this competition and when asked what she has learned from her first experience in the senior competition at Melbourne Park, she said: “I’m most proud of how I handled it on the court.

“I guess what surprised me is how calm I was going into all these matches. I wasn’t really nervous.

“I’m happy that I’m not letting the moment seem too big than what it is.”