COZA rape scandal: “I have never been raped in my life” – Ese Walter

Former COZA member, Ese Walter who accused its founder, Pastor Fatoyinbo of trying to seduce her in 2013 has revealed that nothing like rape happened between them.

At the time, Ese had revealed that the pastor made passes at her when she was a member of th church.

However, following the outburst of social media on the rape allegations made against the same pastor by Busola Dakolo, Ese Walter’s case has also been misguidedly tagged as sexual molestation.

She has now taken to her Facebook page to denounce such reports, stating that she has never been raped in her life. 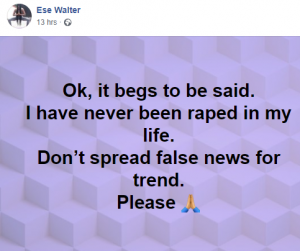