Nigerian singer, David Adeleke, popularly known as Davido has vowed to support Lil Frosh despite dropping the singer from his record label.

Recall that Lil Frosh, who was previously signed to Davido’s record label was dragged on social media after his girlfriend, Gift Camille came out to accuse the artiste of physically abusing her countless times.

Gift who is a Model and video vixen sustained severe injuries on her face due to the constant beating she suffered in the hands of Frosh.

Davido later took to his Instagram page to announce the termination of Frosh’s music contract after conducting an internal investigation into the allegation.

Popular musician, Oladips however apologized to Davido on behalf of Lil Frosh in a recent instagram post, begging the ‘FEM’ crooner to reinstate his contract.

Davido responded to Oladip’s plea, assuring the musician that although Lil Frosh won’t be coming back to DMW, he will not allow him to suffer. 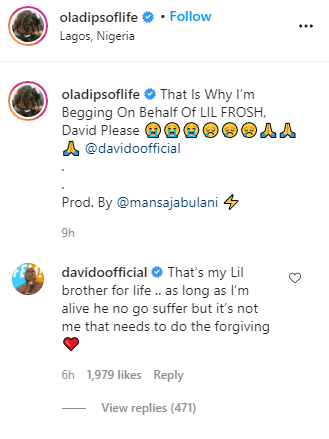