Nigerian music producer, Don Jazzy has responded to a twitter user who claims he gifted her a car worth N5 million.

According to the lady on twitter, Don Jazzy bought her a car after she had complained to him that her old car had broken down.

She took to Twitter and posted photos of herself posing on top of a red Toyota Corolla and wrote: “Twitter Fams, help me thank @DONJAZZY for blessing me with a car gift. I told Donbaba my car had a breakdown, he sent me 5million naira to purchase this little baby. Thank you sir.”

Some of her friends and followers took to her comment section and congratulated her while others tagged Don Jazzy to beg him for help.

Don Jazzy later responded to the clout chaser. Don Jazzy tweeted: “Jesu 5m ke? In this economy? Please introduce me to that Don Jazzy. He should come and buy for me too. Aunty you re chasing away my helpers o.” 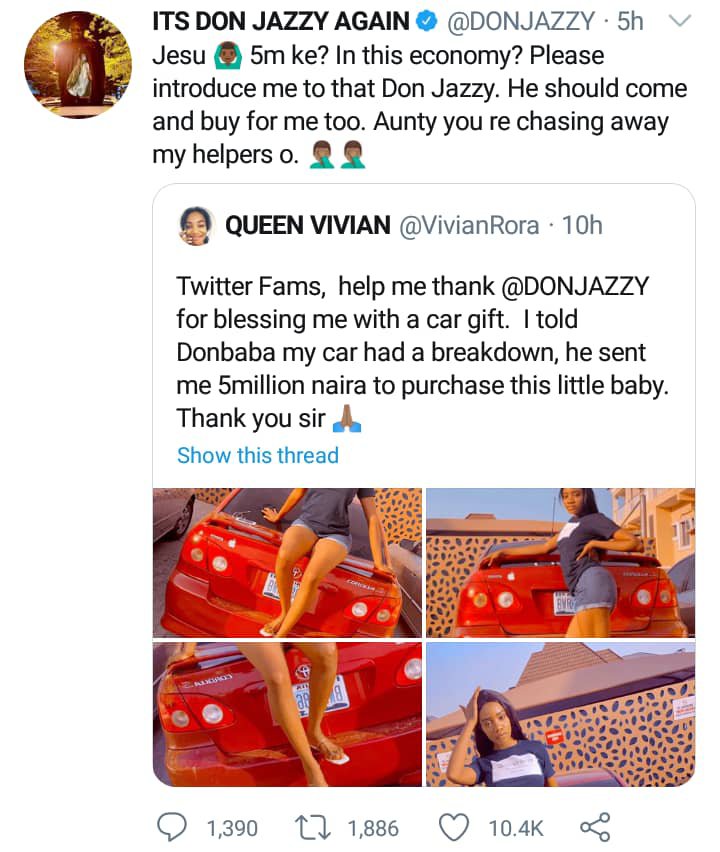 Meanwhile, Former Ekiti State Governor, Ayo Fayose said that he has been vindicated for his pre-2015 calls against voting President Muhammadu Buhari into office.

He stated this in a Twitter thread on Thursday after the president spurned the National Assembly’s invitation to address it on the state of security in the country.

Fayose called on those who opposed him at the time to apologise for misleading Nigerians into voting the retired general.

Recall that Buhari spurned the invitation a day after the Attorney-General of the Federation, Abubakar Malami SAN stated that the National Assembly lacked the constitutional powers to summon the president to appear before over insecurity.

He added that since security was the preserve of the Executive Arm of government, it was at the president’s discretion whether or not to honour the invitation.