The Senator took to his Twitter page to note that Western media are quick to link criminal activities to Nigerians while branding Nigerians as theirs when they make positive impacts to the society.

This comes after several Western media outlets had on several occasions claimed Nigerians including Anthony Joshua, Dr Oluyinka Olutoye, and others.

The senator on his social media page wrote:

“The Western media mislabels Nigeria and until the lion tells his own side of the story, the tale of the hunt will always glorify the Hunter.”

“Nigerians don’t commit anywhere near the cyber crimes committed by Russians. But Russia has RT, a global media. We need our own global media”

“What I’m saying is use whatever media you have to project Nigeria positively because no matter what, your value is tied to that of Nigeria.”

“When Joshua was arrested with drugs British papers called him Nigerian. When he became heavy weight champion, he became British super fast!”

He added: “When @CNN reported Dr Oluyinka Olutoye’s ground breaking surgery, he was American. But if he’d been caught for fraud he’d have been Nigerian” 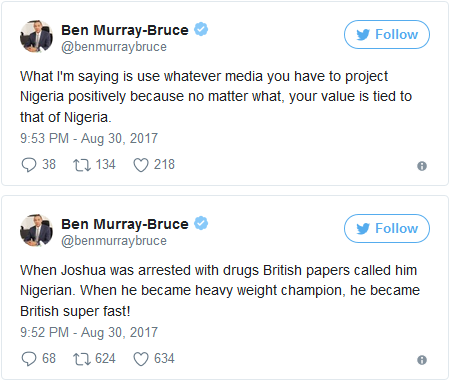 UNIPORT confirms identity of suspect who killed niece for ritual