Bundesliga side, Borussia Dortmund have announced it will be hosting a crowd of ten thousand during Saturday’s opening league fixture  at Signal Iduna Park.

The move comes after Bundesliga clubs were permitted by the German government to allow fans to return to stadiums for the start of the 2020-21 season in Germany amid the coronavirus pandemic.

Borussia Dortmund’s season-opening Bundesliga fixture at home to Borussia Monchengladbach will now be played in front of 10,000 supporters, as the new government rule states that up to 20 per cent of stadium capacity can be used, while strict hygiene requirements will be imposed, and alcohol banned.

Away fans will not be allowed to attend, though a game would be forced back behind closed doors if the infection rate in the home city is too high over a seven-day period.

The 2019-20 campaign resumed behind closed doors in May due to Covid-19, which forced the league to be postponed in March.

During the match, only Dortmund or North Rhine-Westphalia residents will be granted access.

“The Bundesliga teams, but also the clubs and associations of other sports, can be very happy today, and we definitely have this feeling at BVB,” said Dortmund chief executive Hans-Joachim Watzke in a statement.

“I would like to thank everyone in politics who contributed to today’s decision in the past few weeks. At the same time, I feel a great obligation that we as clubs, together with the fans involved, will handle this probationary period extremely responsibly in the coming weeks. The now approved partial re-admission of viewers is in any case a very important step for all football fans in Germany. ” 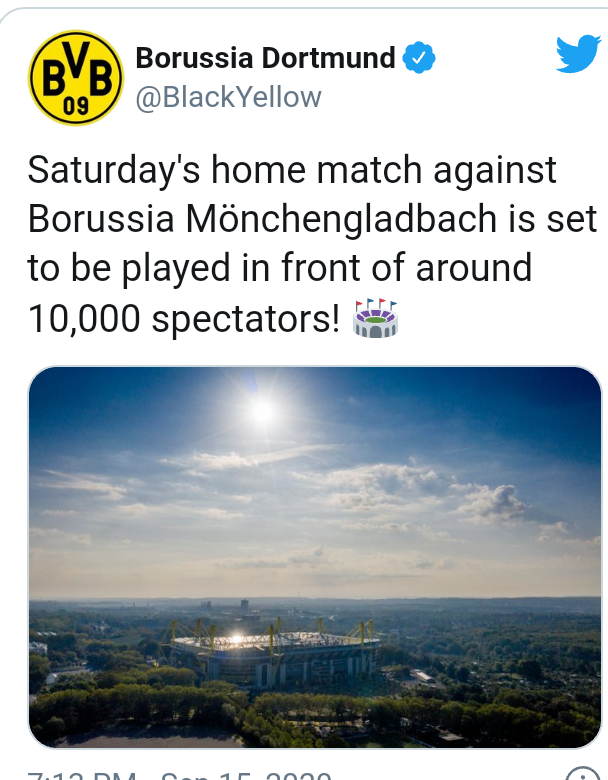 Koeman Claims Relationship With Messi Is Smooth Amid Rumours