Edo State Governor, Godwin Obaseki has on Monday, stated that his feud with his predecessor, Adams Oshiomhole is now over, after an extensive meeting.

Recall that the two politicians have been at war against each other, causing the emergence of different factions in the state’s house of assembly, and even attracting the attention of Federal lawmakers in the country.

However, the governor who attended a mass at the St Paul Catholic Church, Benin, to celebrate a former APC chairman, John Odigie-Oyegun on his 80th birthday, revealed that things would soon be back to normalcy between him and Oshiomhole. 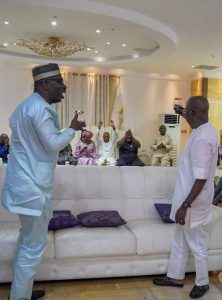 He stated, “things will soon return to normalcy in the state. I thank you very much for the remarkable homily.

“I listened very attentively and I have taken every word in your remark to heart and very seriously. I want to assure you that we are in pursuit of peace and we will have peace in Edo state.

Also, read: Only a ‘liar from hell’ will say Buhari is not perfoming – Lagos APC spokesman