Governor of Kaduna state, Nasir El-Rufai, has stated that residents in the state are divided as a result of religious differences. He explained that the situation is appalling and some things need to be done to foster unity in the state once again.

El-Rufai emphasized that no matter whom he chooses as his running mate, all the Christians in the southern part of Kaduna have vowed not to vote for  him during the next election.

Rufai made the claims when he was hosted on Channels TV’s Sunrise Thursday program.

He explained that he chose a Muslim as his deputy solely on the basis of political preference and nothing more. El- Rufai also said that since he was a politician, no one should have expected him to do otherwise. 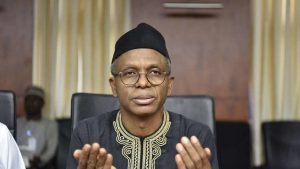 “What if I tell you that no matter who I choose as my running mate, even if I choose the Pope, 67 percent of the Christians in Southern Kaduna have made up their minds that they will never vote for me. I am a politician, so everything I do is politically motivated,” he insisted.

El-Rufai equally explained that ethnicity or religion was not considered when he was choosing his running mate. He subsequently encouraged Nigerians to live above such inclinations.

He stated, “Kaduna state is divided and needs to be united and the only way to this is to take religion and ethnicity off the table.”