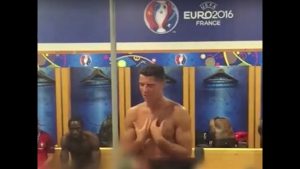 A new video has emerged of Portuguese football star, Christiano Ronaldo praising the players and officials of the Portuguese National team after their victory in Euro 2016.

In the video, Christiano Ronaldo is seen shirtless in the dressing room, addressing members and officials of the national team, saying,

He said all the other trophies he had won are meaningless, compared to this one and he is grateful.