Eve Jobs takes a jab at the new iPhone 14 release

She posted a meme on her Instagram story with the caption “me upgrading from iPhone 13 to iPhone 14 after Apple’s announcement today.” 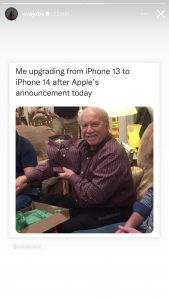 Her post is especially consequential because people believe that Apple has not been the same since her father, Steve Jobs’ death.

From her post, users can expect that they will be getting essentially the same features on this new iPhone as the one before it, which is not much of a surprise since Apple has been churning out new phone releases like they are running a fast-fashion brand.

Africans concerned about losing access to Figma after Adobe acquisition