A lady took to her social media page on Facebook to accuse a Benue State University lecturer of the department of Political Science, Mkor Aondona, who according to her is popularly known as MOPOL of being a serial rapist.

The lady took to the Benue Peoples Forum on Facebook to accuse the lecturer whom she regarded as ‘a rapist with a tiny penis’.

She wrote: “This fat Fool called MKOR AONDONA of the department of Political science BSU Makurdi is the worse sycophantic bull dog around Ortom. The kind of village of local sycophancy he is doing not even people like Berger or Chir or all these urchins around governor Ortom will do it. He is afraid of a Senate report which has recommended is dismissal. He is doing sycophantic issues so that government will prevent his dismisal. He is a serial RAPIST with his tiny penis.”

In reply, the die-hard Governor Ortom supporter noted that he was being defamed by the anti-Ortom people of the state.

See his reply below: 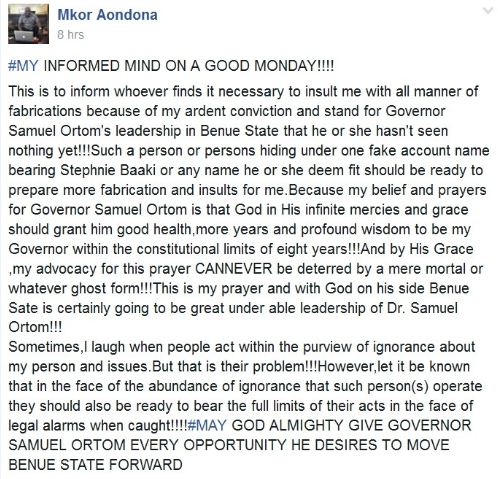